Pittsburgh Steelers head coach Mike Tomlin set the today ahead of last night’s game for what he wanted to see from two of his young running backs vying to make the team as the third option behind starter Le’Veon Bell and DeAngelo Williams.

He told the media that he wanted to see more explosiveness from Fitzgerald Toussaint on the offensive side of the ball, and from Daryl Richardson, who flashed in his preseason debut, he wanted to see more detailed work when it comes to carrying out his special teams assignments. I believe we saw a bit of both last night.

Toussaint, who was with the team either on the practice squad or 53-man roster all of last season, started the game for the Steelers, and seemed to get a longer burn than in the opener this time around. Though he only gained 26 yards on eight carries, and 16 yards on two receptions, he showed a bit more burst and urgency in his movements this time around.

Though he had a handful of negative runs on the day, a product of playing with mixed and matched offensive lines, he also had three carries of at least seven yards, including an 11-yard run. Late in the third quarter, he also did a nice job of catching a pass on a crossing route and outrunning the pursuit for a nine-yard gain on a third-and-eight.

As for Richardson, his day on offense came up shy in comparison to the first game against the Lions. In fact, he totaled just 15 yards on 10 carries, averaging 1.5 yards per carry, and added a six-yard reception. But even more so in his case, a number of negative plays were the result of the standard blocking woes.

His first carry of the game was a two-yard loss due to a missed block, and his second a three-yard loss, again due to a miss. His next four carries went for five, four six, and seven yards, but two more negative runs—40 percent of his carries, resulted in his poor yardage total and yards per carry.

On the other hand, he did manage to record his first special teams tackle of the preseason, even though the official log mistakenly credits the defensive number 38 with the tackle, rather than himself, but such is the nature of 90-man rosters full of future castaways.

Right at the start of the fourth quarter, Will Monday punted short and allowed the returner to shag the ball on the run. Richardson, working as the left up back on the punt, got down field and was able to scrape off a block, square himself up, and make a strong, solid tackle on the returner. 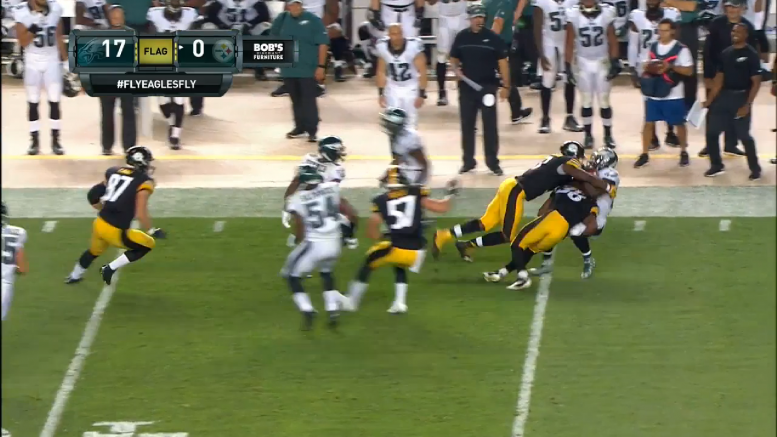 If Richardson wants to work his way up the depth chart and dress on game days, making himself an asset will go a long way toward that goal. But Toussaint is also keeping pace, as the battle for the third running back spot forges ahead into next week.