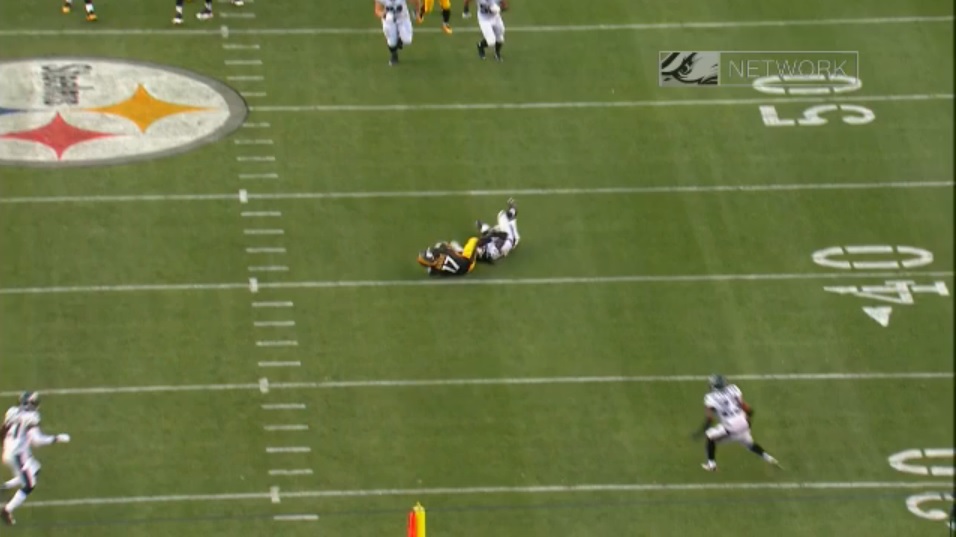 Welp, there was a game tonight. How much football there was is for you to decide.

Eli Rogers: Rogers had a quintessential slot receiver game tonight. A trusty target on third down, he moved the sticks at least twice. Rogers is a nuanced route runner whose best asset is simply finding grass and making himself an open target. It’s still a little difficult to envision exactly what role he may have in a regular season offense but Rogers is doing all he can to pick up playing time.

Shamarko Thomas: A near-penalty on special teams aside, Thomas was all around the ball, leading the Steelers with five tackles. He was superb in the open field. This might not be brand new information on him, in fact, it’s the same old story, but it’s a positive mark on a dreary night.

Lavon Hooks: My opinion could change after reviewing the game again but Hooks was solid against the run, the way his frame suggests he plays. He made at least one tackle flowing to his left. If the Steelers want to keep a big body on the practice squad, Hooks could be that guy.

Tyler Matakevich: Yes, it is really only one play that will come to mind but it was a goodie. Matakevich shot into the backfield for a TFL in the second half, waking up sleepy fans waiting for this one to end. He also showed excellent chase to make a tackle on a punt earlier in the game.

Al-Hajj Shabazz: Tonight, he made the same plays we saw in training camp. He broke up a fade at the goal line, just like he did in the joint practice against the Detroit Lions, swatting away a fade to Jay Lee. He’s a physical player who is willing to support the run. Shabazz is someone who continues to stick out as an option for the practice squad.

Jacob Hagen: Another small name in the secondary, Hagen got a good bit of burn and made his presence known after a tough week vs Detroit. He made a nice tackle on kick coverage, limiting the Eagles to a short return, and had some forceful hits in the secondary. He was officially credited with three tackles and a deflection.

Landry Jones: As Mike Tomlin said, and if you hung out with me on Twitter, I talked about throughout, not all four interceptions were his fault. At least two weren’t or had other major factors at play. But even recognizing that, it was far from his best day and his first interception had me pulling my hair out. Easy concept, poor read, worse throw. That’s how pick sixes are born. We’ll break it down in the AM.

I give credit to Jones for shaking it off and leading some impressive drives but that isn’t the storyline you want your quarterback to come away with.

Sammie Coates: There was some good in this game from Coates, including a 24 yard toe-tapping catch along the sideline. But you could argue he should’ve worked back to the ball on the first INT and I thought his effort all-around was poor on the third. Coates looked back for the ball, slowed up on the route, and gave little effort fighting for the ball in the air.

He also didn’t have a strong game on special teams, getting knocked down as a gunner on one occasion. Danny Smith won’t be pleased.

Jesse James: James has the demeanor and size to be an effective blocker, and he continued to show well in that area. But he’ll be remembered, for the next week anyway, for the pressure/hit given up on Jones’ final interception. Never a good feeling to get your quarterback crushed.

Chris Hubbard/B.J. Finney: Because we always conjoin these players at the hip, it’s only appropriate to put them both here. Hubbard is far from an ideal option at tackle, and it should be realized he is a gameday #4 option, but his play was “below the line” again at that spot.  Certainly made Dustin Vaughan queasy. Finney got tossed to the ground on a sack.

The only highlight here, in a very much macabre sort of way, is Cody Wallace’s knee injury could open a path for both Hubbard and Finney to make the 53.