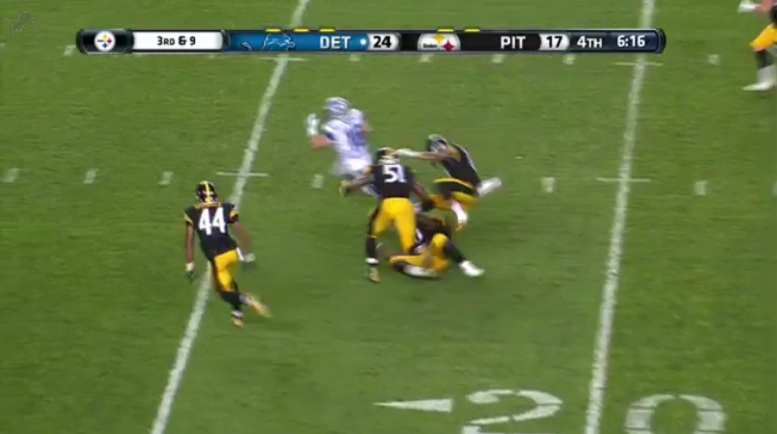 If one thing stuck out clearly in the Pittsburgh Steelers 30-17 preseason loss to the Detroit Lions, it’s the fact that several defensive players must get better in the tackling department between now and the start of the 2016 season. After the game at Heinz Field was over, head coach Mike Tomlin addressed his team’s deficiency in that particular area.

“On defense, I didn’t think that we did a good enough job on third down. Some of that was coupled with just poor tackling, guys hustling to the ball but not coming to balance and overshooting the runners and so forth,” said Tomlin during his post-game press conference.

Throughout Friday night’s preseason opener, several different Steelers players missed tackle opportunities and the two most obvious ones were defensive backs Shamarko Thomas and Sean Davis, the team’s second-round draft pick this year. Additionally, late in the fourth quarter of the game, Lions wide receiver Jace Billingsley scored from 27-yards out after catching a short pass near the middle of the field on a 3rd and 9 play. On that particular play, six different Steelers defensive players all missed chances to stop the young wide receiver from scoring.

As part of the new CBA that went into effect in 2011, the league decided to place limits on the number of full-contact padded practices allowed by teams during the regular season in addition to only allowing each to conduct one full-contact padded practice per day during training camp. While teams are permitted a total of 14 padded practices for the year, only 11 of those practices can be conducted during the first 11 weeks of the season (a maximum of one per week). Tomlin, however, isn’t ready to blame his team’s recent history of poor tackling on those CBA changes.

“I’m not ready to paint with a broad brush, I’m just telling you what happened in the stadium tonight,” Tomlin said when asked if poor tackling around the league is endemic because of the changes in the CBA several years ago.

If you remember back to last season, the Steelers defense didn’t tackle very well at all in more than their fair share of games. Even normally reliable inside linebacker Lawrence Timmons had his share of missed tackles throughout the season.

As the team starts putting their final touches on this year’s training camp, expect Tomlin to put even more of emphasis on tackling from now and until the start of the regular season. The team purchased several new tackling robots this past offseason in hopes that it would help players in that phase of their games. However, judging by what we observed Friday night at Heinz Field, perhaps they need to think about getting their money back on those Mobile Virtual Players.

The Steelers will have a chance to show that they can improve their tackling to fans next week when they host the Philadelphia Eagles for another preseason game at Heinz Field.

“The tackling was not up to snuff in particularly on possession downs,” Tomlin said Friday night. “They moved the chains quite a bit by throwing the ball short of the first down and guys are running after because we missed tackles.”