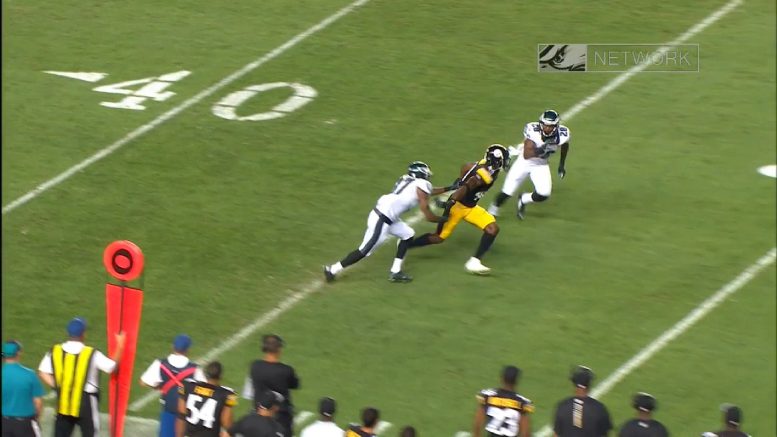 If you are looking for somebody to fill the vacancy with which the Pittsburgh Steelers find themselves at the fifth cornerback spot, then first-year player Montell Garner may be as likely as any, as a player who plays multiple positions in the secondary and also contributes on special teams.

Against the Eagles, Garner worked with the second-team personnel in the slot, and later in the game finished things up taking reps as the left outside cornerback. He also served as a gunner on the Eagles’ last couple of punts and pressured well both times, the second occasion drawing a fair catch.

He also showed some ability to close, as well as to tackle, as when he stopped Eagles wide receiver Paul Turner two yards shy of a first down on a second-and-six play. He did so operating in a greater area of space, since the ball was snapped on the far hash mark.

While he did give up a first-down reception for 17 yards (on a first-down play) later in the first half, with less than a minute to play, his performance, I think, skewed positive overall. Midway through the third quarter, when he returned to play on the outside, he was able to track down a check-down ball to the back out in the flat and chase him to the sidelines for a modest gain.

Later, in the fourth quarter, he has one of his rare instances in which he was involved in the run game. On a second-down effort, facing a heavy set in his direction, Garner managed to take on the extra lineman lined up as a fullback in order to help the rest of the defense make the tackle.

A bit past midway through the fourth quarter, Garner was able to split a pair of vice jammer working along the right sideline to pressure the punt returner, but was only able to get within about seven yards of him by the time he fielded the ball. He did flush the returner to his right, where he was tracked down by a host of Steelers, and gained just two yards.

As mentioned, on his next crack at working as a gunner on the punt coverage team, he did get down the field in time, once again splitting a pair of vice jammers in order to do so. To put it quite simply, an aptitude toward special teams work is a plus in his favor.

Of course, later in the game, he allowed a reception on a third-and-two play deep in Eagles territory, but as he was making the tackle, he also eventually forced the ball out and was credited with a forced fumble in addition to one of his five tackles on the night.

As a player who can line up either outside or in the slot and also make positive contributions in at least one phase of special teams, Garner boosted his stock just a bit against the Eagles. Whether that stock is for a roster spot or for the practice squad is yet to be determined.