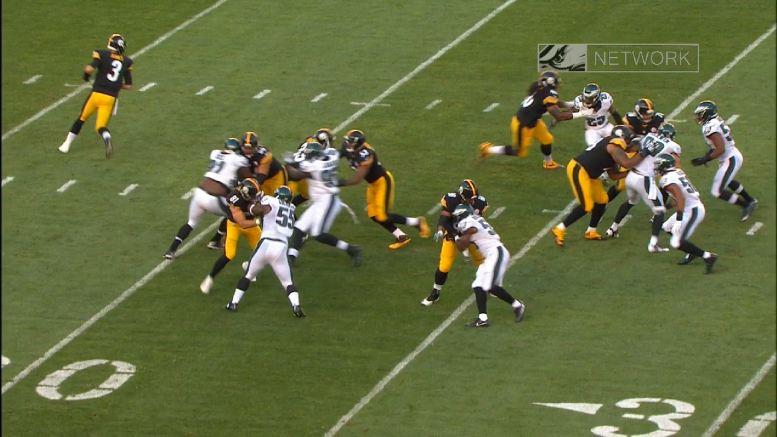 I mentioned last week that the return of Pittsburgh Steelers center Maurkice Pouncey against the Eagles was a victory in itself, in spite of the fact that the final scoreboard tally of that game read a 17-0 deficit going against them. I also mentioned that he not only returned, playing all of the first quarter, but he played quite well. I suppose it’s about time to put some of the evidence out on tape.

The Steelers opened the game with a deep pass down the left sideline, and Pouncey provided a stout anchor of pass protection up the middle on the play, though it resulted in an incompletion. On the following play, he did an excellent job of working the defensive tackle out of the running lane for a seven-yard pickup.

The middle of the first quarter saw the Steelers offense take another deep shot down the left sideline, this one to Sammie Coates, which he caught, but he was flagged for pass interference. A big reason that the play nearly worked, however, was Pouncey’s ability to anchor once again and keep the pocket clean for Landry Jones, working the defensive tackle to the side.

Later on the same drive, the All-Pro center did some rooting, getting underneath the shoulder pads of the tackle and turning him out of the hole, through which the back was able to squeeze for a relatively modest gain. This was one of a few occasions in which he was able to turn a lineman out of a hole, and this just in one quarter of action.

Fitzgerald Toussaint was the runner, and he followed with an 11-yard run on the following play. Seeing the middle linebacker ready to blitz, Pouncey cut his feet out from under him deftly. He worked a double-team block on the down that followed, sealing the tackle out of the hole, though the run went in the opposite direction.

Late in the quarter, on the Steelers’ second-to-last play with Pouncey still in the game, the Steelers ran an end-around with Coates, who picked up nine yards on the play. While it was the lead blocking of the h-back that led the way, Pouncey’s early work in sealing the middle linebacker kept him from getting into the play at all.

The seventh-year center was in the game for just one more snap—an interception in the end zone—before he took a seat in favor of his backup, but he showed to me enough to convince me that he is back and ready for game action. He came off a torn ACL in 2014 to have his best year, and seems to be following a similar pattern.

While he did not show a great deal of pulling or second-level blocks, his athleticism seems to be well in place. I suspect we may see a few more plays of that nature in the game against the Saints later this week with the full first-team offense.