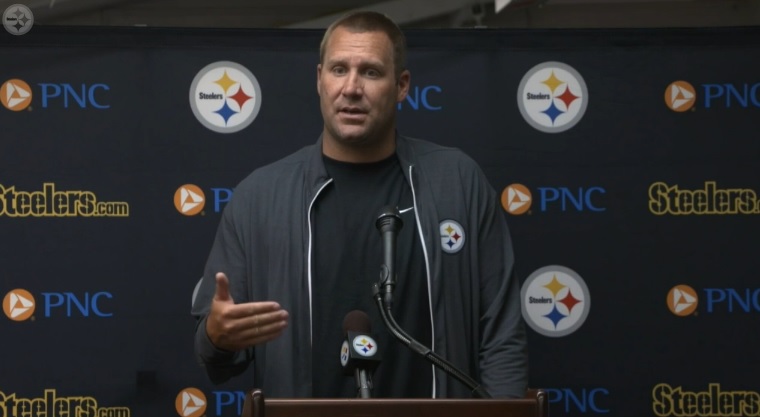 The Steelers’ offense moving the ball against defenses is nothing new if you’ve watched this team for the last two seasons. But it was the way they did it in last night’s win over the New Orleans Saints that was a bit surprising, definitely encouraging, and a precursor for things to come.

Led by Ben Roethlisberger, the team ran a no-huddle, up-tempo offense despite playing on the road in a loud environment. Clearly, it didn’t have any affect, the Steelers marching down the field for touchdowns on their opening pair of drives.

“We were probably 90% no huddle, calling it as we see it and going,” Roethlisberger told the media following the game. “I think it was a good combination of that and [Todd Haley] chiming in with a play or two here and there. Which I think is when we’re at our best. When they see something, they holler it into me and we get it called. And it worked out great.”

It’s that quickened pace Roethlisberger says he expects the Steelers to use quite a bit in 2016.

“I think our base offense is going to be up tempo. We have lots of different speeds. We have a two minute, which is as fast as you can go, we have a no huddle, which is moving it pretty quick, we have a muddle, which is I’m calling into the line and calling it to the receivers. So we have lots of different speeds we wanted to practice tonight. Most of it was no huddle but some of it was muddling.”

Roethlisberger began the game with a 15 play, 74 yard drive, capped off by a five yard touchdown pass to Jesse James, who broke free on a scramble drill.

The next series ended quicker but the same result. Four plays, 79 yards, capped by a rainbow throw from Ben to Antonio Brown, who ran away from the last defender for a 57 yard touchdown.

Part of it is having elite talent. And part, the ramped up pace that makes defenses’ heads spin. Roethisberger explained the advantage no huddle gives the offense.

“I think it’s just getting into the flow of the game. Being able to see what the defense is giving us. Changing plays, calling plays. When you’re up-tempo like that you can slow a defense down. They can’t always get their calls in, they can’t always do what they want to do.”

And the most important group have given it their blessing.

This pace, the ability to stick with it or sprinkle it in, is all led by their quarterback. A trust factor by him and Todd Haley, who to his credit, puts his ego aside to let his quarterback do what he does best. And in that regard, Roethlisberger falls back to being a true backyard quarterback. A figure-it-out-when-you’re-there mentality. It’s not reckless, it’s efficient. Never putting your offense in a bad situation because of a pre-snap playcall. Truly reading the defense and determining the best call.

Good luck stopping the Steelers in 2016.