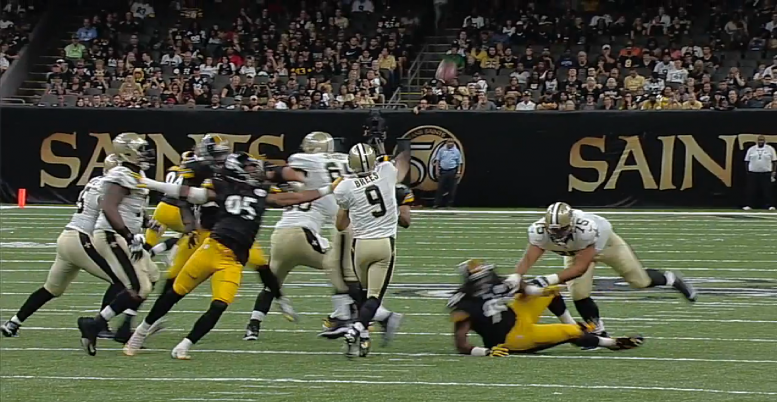 Now that the first-team players have finally gotten their first significant workload, the annual Pittsburgh Steelers Jarvis Jones watch is underway as many patiently and impatiently wait to see how the fourth-year outside linebacker looks. Many have already written off the possibility that he develops into anything more than he already is, while others hold out hope for more.

The former first-round draft pick sat out the Steelers’ first two preseason games with a minor injury, but was able to return to practice this week, and made his preseason debut last night against the Saints in a victory, beginning the game as the starting right outside linebacker.

In spite of the fact that he logged his fair share of snaps with the first-team defense, he did fair to record an official statistic in the process, and was not noted in the NFL’s official play-by-play as being involved in any plays, although as we should know, that does not represent necessary a poor performance.

And, in fact, Jones did have a pretty good game against the Saints, particularly showing the ability to get pressure a few times, though that came against an ailing starting left tackle, and then later his backup, who happens to be former Steelers offensive lineman Tony Hills, who is clearly still kicking around the league after nine years.

He made an impact pretty sure in the game, in fact, after the Steelers’ defense forced the Saints’ first-team offense into an early third-and-long situation. Jones was able to beat the left tackle around the edge, and was close to getting to Drew Brees, but he was held.

Brees felt the pressure and was forced to try to check the ball down to his safety valve running back, shoveling the ball, but poorly, and falling incomplete. As noted, Jones was held on the play, and it yet was not called, though of course would have been declined, given the circumstances.

The Saints did manage to get a first down to start their second drive, converting on the ground on a short-yardage opportunity on third down. Brees hit a big play down the field to his tight end on the following play, but it was called back this time.

Again, Jones was held as he came around the defensive right edge, around the left tackle, in fact, quite a number of times. The tackle got a hold of his chin strap to start things off, then held back his head, then his jersey, and ultimately his arm as he tried to assure that Brees was not hit before he threw.

That penalty pushed the Saints back into a first-and-20 from which the drive could not recover, and James Harrison rotated in for Jones on the next drive, on which Brees threw his lone touchdown. It might be interesting to note that Jones checked back into the game on the left side of the defense for the Saints’ fourth offensive drive.

He did move back over to the right side on the final play of the drive, and got some hustle pressure on that play as well. I’m not saying that Jones is turning a corner or anything of that sort in his fourth season, but his 2016 preseason debut was not a bad start, statistics or no.