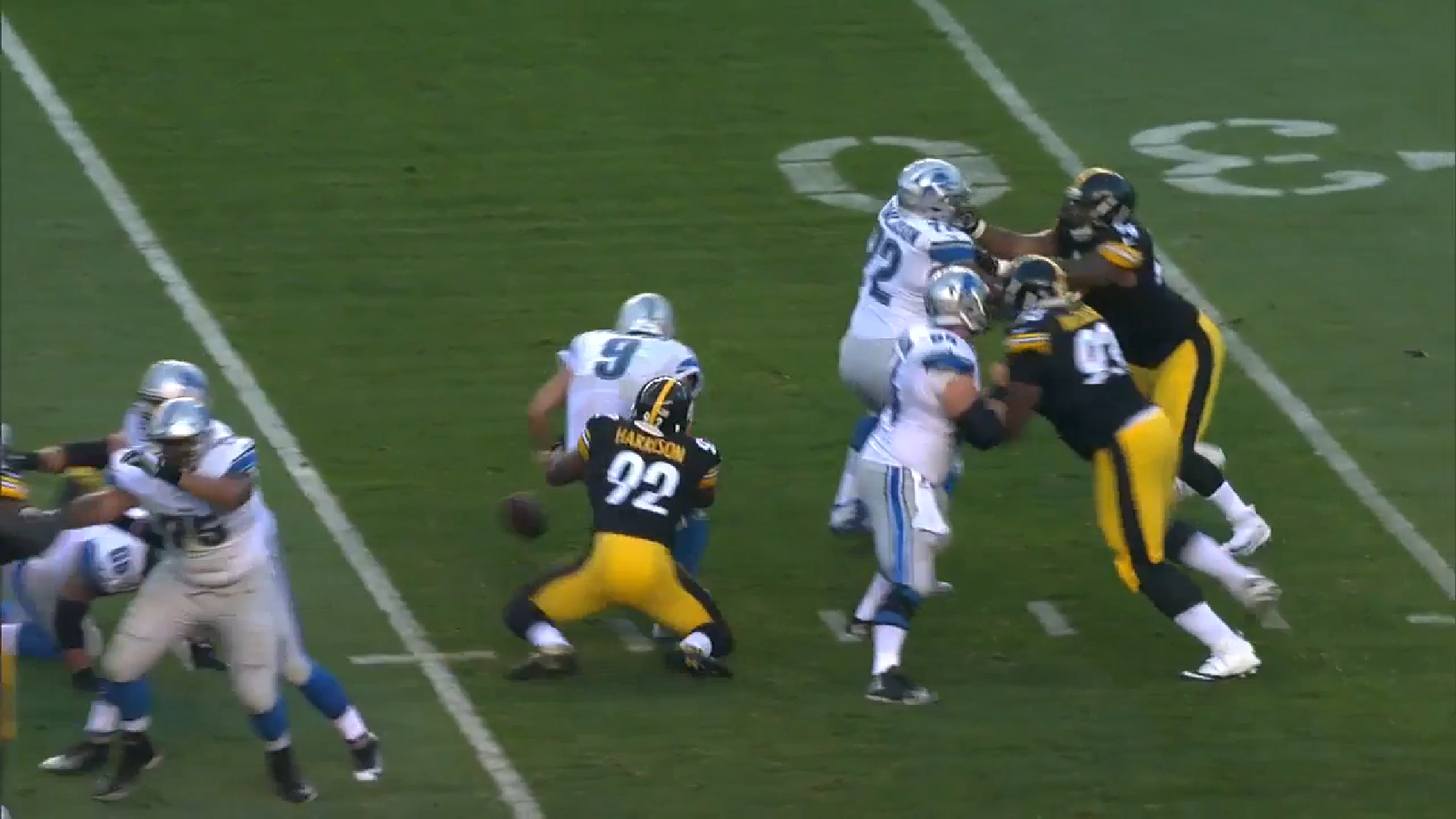 Would it surprise you to read that, for the Pittsburgh Steelers, 38-year-old linebacker James Harrison was the best defender on the field on Friday night? It probably shouldn’t, given that that has for the most part been true at any age over the course of the past decade or so.

It was of course the former Defensive Player of the Year who made the defensive play of the game in the most important moment of the game, at least with respect to what sort of meaningful implications there might be for games that will be played that matter at some point in 2016.

While the Lions were able to drive down the field to start the game, thanks in large part to their ability to convert on multiple third-and-long situations—on one occasion seeing Matthew Stafford drop a dime toward the left sideline between Harrison and William Gay to Marvin Jones—the drive would stall in significant fashion just outside the red zone.

The Lions had gotten as near as the 17-yard line as Stafford scrambled for seven yards on third down and two to the 10-yard-line, but a hold negated the play and set up a third and 12 from the 27. With Harrison able to pin his ears back, he made quick work of the Lions’ rookie left tackle, dipping the shoulder and getting around the edge quickly to tomahawk the ball out of the quarterback’s grasp.

It was not the only time that Harrison was able to dip the shoulder on Taylor Decker, as he also managed to do so on the Lions’ first third-down conversion, but Stafford got the ball out quickly. Had he held on to the ball just a bit longer—less than half a second, surely—then the pressure may well have been able to get home. Instead Detroit converted.

Harrison also had a brighter moment in coverage than the other alluded to third-down conversion to Jones. Earlier in the drive, Stafford tried to get the pass out to his running back in the flat, with the linebacker drifting in that vicinity as the Fire X blitz of the inside linebackers bolstered the pass rush. Though the back bobbled the reception attempt, Harrison was there, ready to level him.

He also made two tackles or assisted on them in run support, as should be no surprise. Run defense has always been Harrison’s strongest category of play, even when he was a dominant pass-rusher. 3-4 outside linebackers are not supposed to rack up 100-tackle seasons, but he did.

Did I mention that he was subbed out for several plays on that opening drive, and was only just put back in the game for that third-down play on which he produced the drive-killing turnover? Considering that he is not supposed to start this year, that is not an insignificant point to be made.