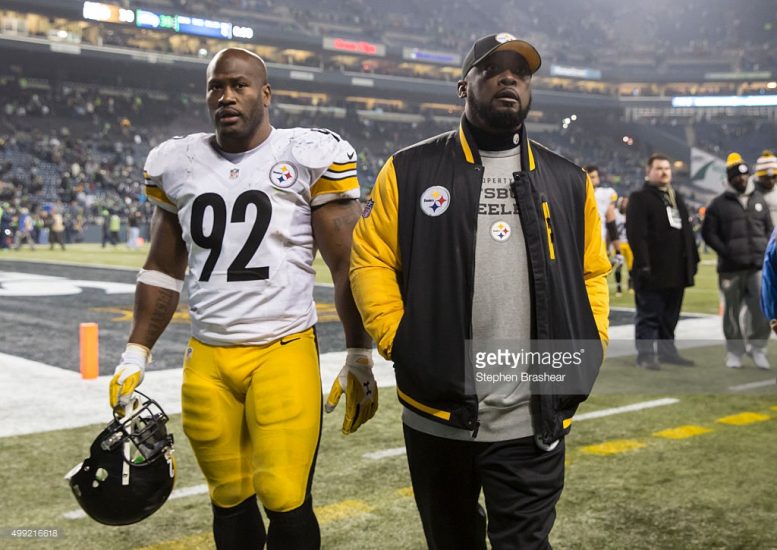 While the battle between Pittsburgh Steelers linebacker James Harrison and the league slowly comes to a head following him being warned Monday that he faces a possible suspension should he not meet with them to discuss the PED allegations that were made against him, head coach Mike Tomlin was asked Tuesday during his press conference if he plans on offering the 38-year-old any advice on how he should proceed with the situation.

“I won’t advise James of anything,” said Tomlin. “That has nothing to do with us. That’s between him and the NFLPA and the league and I assume he’s going to do what he needs to do.”

Harrison, who talked to the media Monday morning about his current situation with the league, reportedly said that he does not want to be suspended and that he plans on following the advice of the union lawyers as it relates to him possibly granting the NFL their interview request with him.

“I’ll do what I have to do, they’ll do what they have to do. We’ll make that decision when time comes,” Harrison reportedly said.

The NFL reportedly stated in a written letter to Harrison on Monday that they will suspend him indefinitely if he fails to interview with the league by Aug. 25. The same goes for Clay Matthews and Julius Peppers of the Green Bay Packers, as they and current free agent Mike Neal were all linked to performance-enhancing drugs in the Al Jazeera America December documentary The Dark Side.

The NFLPA has previously stated that affidavits submitted by the four players in July constituted reasonable cooperation, but the league has since said that wasn’t acceptable.

Here's what @jharrison9292 had to say about the NFL's threat to suspend him. @timesscores: pic.twitter.com/T9gGkDwtqm

Harrison: "I'll do what I have to do, they'll do what they have to do. We'll make that decision when time comes."