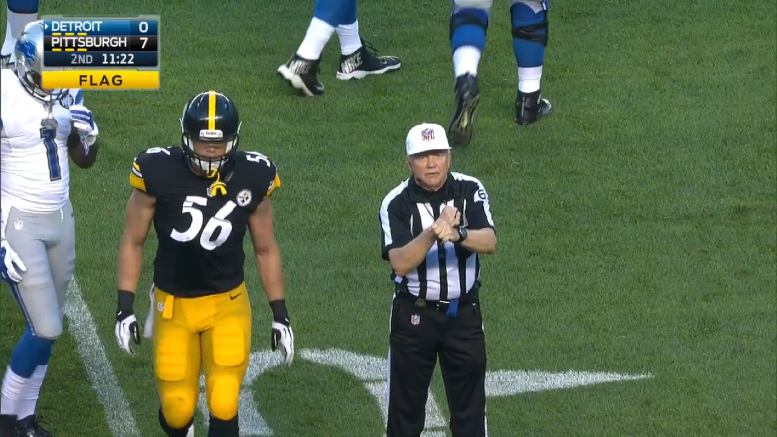 Pittsburgh Steelers second-year outside linebacker Anthony Chickillo lined up for 27 snaps against the Lions in the team’s preseason opener last week, but unless you were paying attention and on the lookout for him—which I have no doubt that many were—you may have missed him.

Chickillo may have been the only Steelers defender to log a significant amount of time without logging an official statistic. The same proved to be true in the one game last season that he saw playing time on defense, logging 22 snaps without recording even an assist on a tackle.

It was a quiet beginning for the second-year player who has for the second August drawn rave reviews during training camp practices, only to be without impact when it came time to line up in a game with actual opponents trying to score.

That is not to say that he played poorly, or that there should be any cause for concern, but rather simply to say that his first game action of the year yielded really nothing to say about him from an evaluation standpoint about his progression as he enters his second season, regardless of what may have been said about his training camp reps.

There was a time or two, to be sure, that he at least demonstrated that he has a better understanding of and feel for the art of the pass rush, as on his first rep of the game following a false start, in which he took a false step inside only to get to the outside and coax the quarterback to climb the pocket, though he was able to scramble and gain good yardage. Chickillo was caught inside, losing contain, on the following play for a solid gain in the running game.

What he does show is a consistent motor, which has been his defining trait throughout his playing career, and that will be something that carries him throughout his football journey. He will even be able to make plays that he shouldn’t due to his refusal to give up on the play, and to play the down hard through the whistle.

One thing that should also be noted is the fact that Chickillo worked on both sides of the field at right outside linebacker to start, and then at left outside linebacker. He took a few reps on the right side on the Lions’ opening drive, but finished on the left.

And he did register a special teams tackle early in the game, though it was negated by a penalty on the play. He left the game with an ankle injury that looks to have occurred early on the Lions’ first field goal drive of the second quarter.

While most of the action during the game found him on the away side of the plays, no doubt the Steelers would like to see Chickillo have a more impactful presence the next time he gets in a game. Hopefully the ankle injury will be nothing to keep him out for very long.