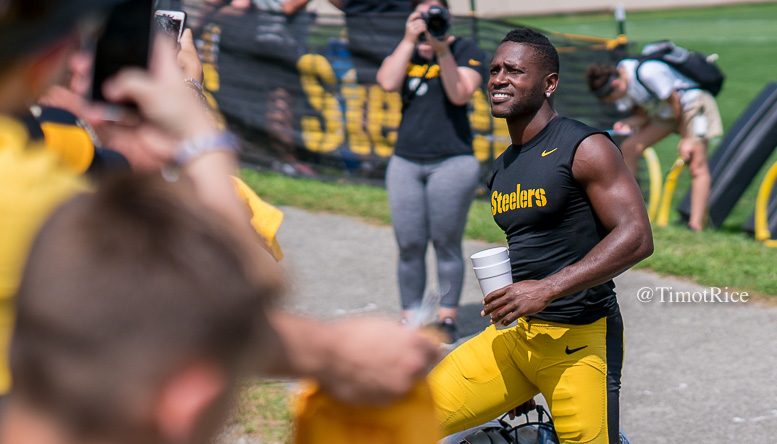 With the exception of a franchise quarterback—and realistically, they have only ever had two—the Pittsburgh Steelers do not negotiate new contracts with players until they have only one year remaining on their current deal, which they have shown willing to tear up in the past. There have been no exceptions.

But if ever there were a player who merited such an exception, it would have to be wide receiver Antonio Brown, and I’m certainly not saying anything that is novel or that has not been said before, but it is something that bears repeating.

Brown is the sort of once in a generation player that a franchise gets and certainly needs to hold on to. While I have no fear that the Steelers will be able to hold on to Brown regardless of whether or not Kevin Colbert and the front office relent and agree to terms with Brown and Drew Rosenhaus on a new extension, it is no secret that he is underpaid.

He even said as much yesterday when he spoke to reporters, though not in so many words, when he alluded to a player who ‘overperforms’ his pay grade. When a player underperforms, he gets cut, so if he overperforms, shouldn’t he get a raise?

The counterargument is, of course, that Brown agreed to the deal, and he did so coming off his second season, knowing that what he had accomplished to that point didn’t merit the raise he was getting then, but also that he could well play beyond that level. The deal struck represented a middle ground between what he was and had done and what he had the potential to become and achieve.

Since then, Brown has achieved everything that could be expected of him and more, all the while serving as a role model on and off the field. He receives more fan mail than anybody else on the team and takes the time to respond to a great deal of it, and, even more importantly, he keeps his nose clean, instead burying himself in his work.

He has handled himself, for the most part, with class, maintaining all the while that holding out would never be an option for him because he has too much respect for the Steelers and the Rooney family, yet both parties know full well that he is woefully underpaid relative to the current market for wide receivers.

I certainly don’t anticipate that Colbert will make the exception, but he may be tempted to do so. I do believe Brown is entitled to have money forwarded from next year into this year, as the Steelers did for him a year ago.

Still, if anybody deserved it, looking back over the past decade or so in team history and beyond, it would have to be Brown, who represents just about everything that an organization could hope to have in a player both on the football field and away from it, a true ambassador of the band and a face of the franchise.