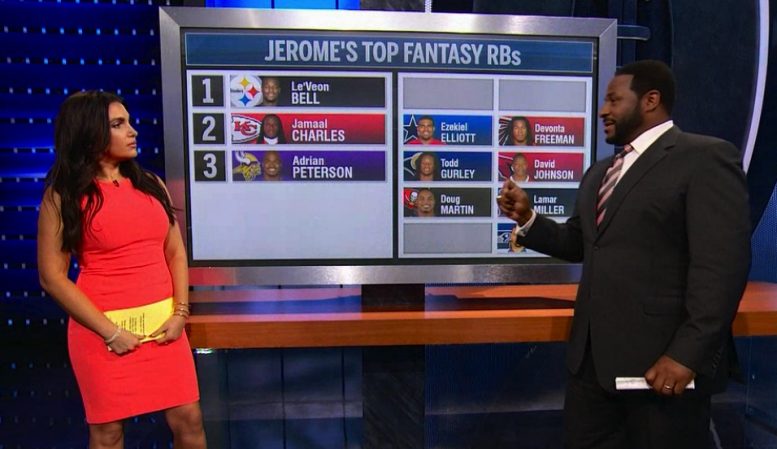 When it comes to ranking running backs for the upcoming season from a fantasy football perspective, Hall of Famer Jerome Bettis has no issues with putting Le’Veon Bell at the top of his list even though he’s coming off of a serious knee injury.

During a Monday segment on ESPN’s “NFL Live”, Bettis explained why he has the Pittsburgh Steelers running back ranked ahead of Jamaal Charles and Adrian Peterson when it comes to fantasy football scoring expectations.

“No. 1, you can call me a homer if you want to, but I’m going with Le’Veon Bell,” said Bettis. “He has the ability to run, catch and the last time he was healthy for 16 weeks. he put up I think over 2000 yards total offense. So I think he has the ability to do it. He has done it before and now just getting him back healthy, getting him going and having a quarterback like Ben Roethlisberger there, and having Antonio Brown, it changes the dynamic because you can’t just key on him, you’ve got to look at them from an offensive perspective which makes him even that much better.”

It’s hard to argue with Bettis’ reasoning and he is correct to point out that Bell had over 2,000 total yards just a few years ago. 2,215 to be exact and 11 total touchdowns. Over 800 of those yards came via 83 total catches so if your league gives points per receptions, having Bell on your team is like having a top wide receiver that also functions as a ball carrier. As long as Bell is fully recovered from his knee injury by the start of the regular season, there’s no reason to think that he can’t put up numbers similar to the ones he put up in 2014.

Bell was quite happy to see Bettis rank him first overall.

“JB is that guy! someone still believes in me,” he posted on Twitter.

JB is that guy! someone still believes in me https://t.co/PN9fBEANq5