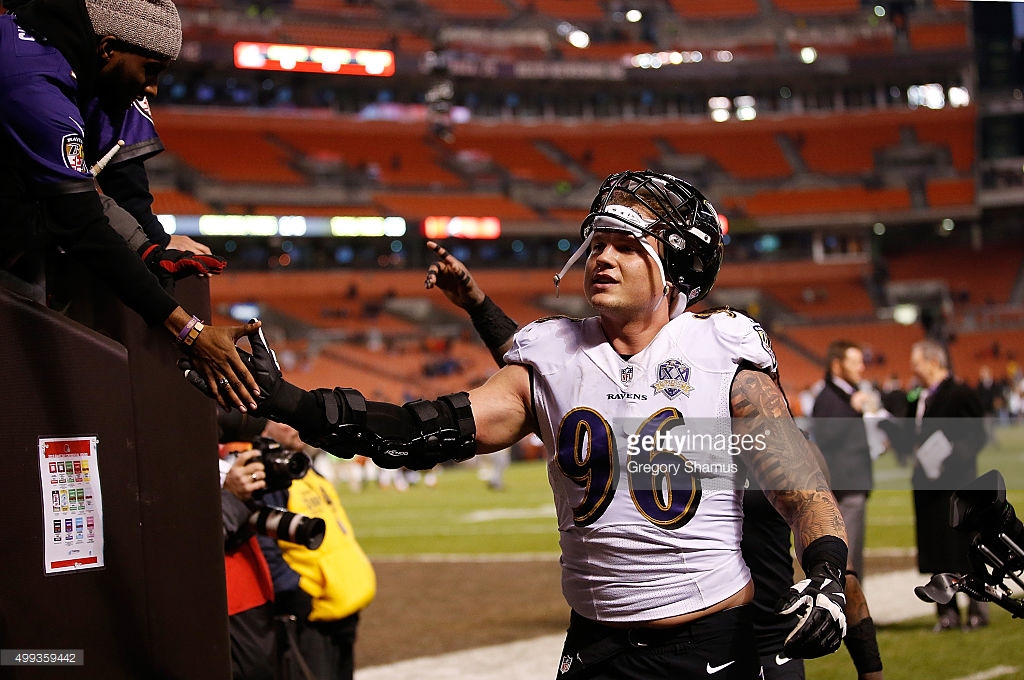 A 2014 third-round draft pick, the Baltimore Ravens’ Brent Urban has had a bit of a snake-bitten career thus far, but the tide began to start turning mid-season last year. After missing about a year and a half due to a parade of injuries, the young defensive end blocked a potential game-winning field goal that was returned for a touchdown, for one of the team’s few wins in 2015.

The 6’7” Virginia product told the team’s website that with lifting restrictions finally no longer an obstacle, he has bulked up to over 300 pounds this offseason, and is eying the starting defensive end job made vacant with the release of veteran Chris Canty, opposite Timmy Jernigan and next to nose tackle Brandon Williams.

Urban already entered his rookie offseason with an ankle injury that he spent time recovering from, only to suffer an ACL tear that wiped 2014 off the map for all intents and purposes. While trying to return from that knee injury, he suffered a torn biceps last spring, and he started the season on injured reserve with a return designation.

He did return, as mentioned, and he played a limited rotational role in the final six or so games of the season, registering 11 tackles and a sack, playing a total of just 90 snaps on defense in those games, while adding another couple of dozen snaps on special teams.

While Canty was the nominal starter, however, it was veteran journeyman Lawrence Guy who logged the bulk of the time at the right defensive end spot, and who will be Urban’s main competition for the spot.

Guy logged six starts officially, playing 485 defensive snaps and accumulating career bests with 46 tackles and 4.5 sacks. He had only had a single sack in his five years prior to last year, in his rookie season with the Colts.

Another name worth noting is another third-round pick in rookie Bronson Kaufusi, but the young end has missed the entirety of the spring workouts due to a back injury, and rookies who miss time in the spring are hard-pressed to win starting jobs when the fall rolls around.

On the impending competition, Urban said that “there’s definitely going to be a good competition”, but he added, “I have expectations for myself and I’m gunning for that starting position every day”. It’s not the only vacant spot on the defense, as they are also eying a competition at inside linebacker, cornerback, and maybe even safety.

Hoping to put the injuries well in his past, Urban has taken full advantage of the Ravens’ new strength and conditioning program, which I have previously written about, with an emphasis on flexibility and injury prevention.

He added that his opportunity to get on the field last year, if even for only about 100 snaps or so, was huge for him to “come out healthy and feel good”, adding that “now the injuries aren’t in the back of my mind”. Instead, he is focused on winning a starting job to join with his draft classmate Jernigan.