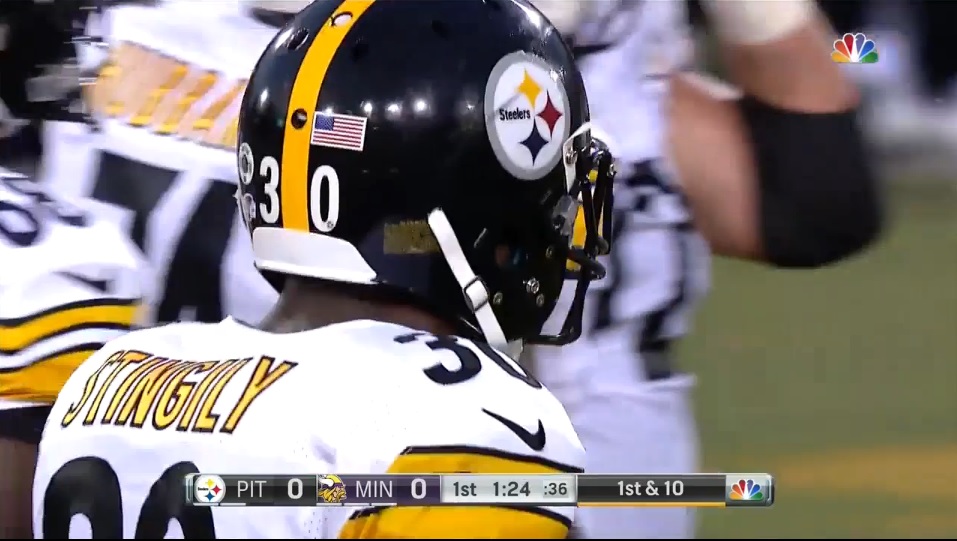 Cameron Stingily is grateful for a second chance. To prove it to himself. To his idols. Jerome Bettis. Mike Alstott. Le’Veon Bell. And a first chance to provide for his daughter.

He got that second chance not a moment too soon. On the day that he had given up his football dreams, to move on with Life’s Work, the Pittsburgh Steelers called back.

A two-player at Romeoville High School in Illinois, Stingily committed to Northern Illinois as a linebacker. He would ask then-coach Jerry Kill to move to running back but as he tells me in an interview last week, Kill would respond, “you’re a big boy and I need you to hold down the middle. ”

After Kill took the job with Minnesota, and a new coaching staff entered, Stingily moved to running back and wound up starting as a junior in 2013. It would be his best season, rushing for 1119 yards and averaging 5.5 yards per carry.

Stingily wasn’t selected in the 2015 draft and unable to secure a rookie contract, was invited to the Steelers rookie minicamp. As we’ve outlined before, going from tryout to contract is a tough task.

He made it to Latrobe and into camp with the Steelers. It was the speed of the game, as so many then-rookies reflect, that served as the biggest wake-up call.

The only exception of someone with intimidating size? Naturally, Daniel McCullers.

“That’s the biggest human being I’ve ever seen in my life.”

August 9th, 2015. His NFL debut, the Hall of Fame game against the Minnesota Vikings. The week Bettis was inducted and sharing the same field with the best two backs in football, Bell and Peterson. But on a third quarter carry, Stingily had his leg bent behind him, tearing his MCL and meniscus.

“It was probably one of the hardest things I had to deal with. I got hurt in front of one of my favorite players of all-time, The Bus. And then AP was there and Le’Veon Bell. I kinda wanted to show them I belonged. I idolized Jerome Bettis so it was kind of a big bummer to not perform.”

The team released him with an injury settlement and for months, his phone was silent. But Stingily remained hopeful, rehabbing and working out, waiting for a second chance.

Hope was harder to cling to in the days following this season’s draft. Again, the phone didn’t ring, rosters all over the league filling up. By that point, he figured his career was over. One day, he skipped his workout, went to his regular job, deciding to quit pursuing his football dream.

And then the phone rang.

“I got a call and they said, we want you to try out again. But I was still in shape because I stopped working out that day. I made my mind up that I was done. And I got the call and that was it.”

Coming out of the draft, it wasn’t clear if teams wanted him to play as a fullback or running back. So he kept his weight, 255 pounds. When the Steelers decided to make him exclusively a runner, his performance suffered. He lacked the quickness to break away at the second level. During last fall, he committed to slim down to his junior year playing weight of 230 pounds. By the looks of it, he’s a completely different player than the one who stepped foot onto St. Vincent’s campus a year ago.

It was his time spent watching DeAngelo Williams and Bell that inspired him to take better care of his body.

“I started taking my diet a little more serious. I was in the running back room with Le’Veon and D-Will. Them dudes were counting calories like sunflower seeds. And so I thought, I need to become a professional on and off the field. I need to take care of my body a whole lot more. I stopped eating out. Tried to just stick to chicken and cut out red meat. More fruits and eat more veggies. Take vitamins and stuff like that.”

That meant avoiding his favorite burger places, Portillo’s and Five Guys. A Five Guys sits right up the road on Route 30 in Latrobe. He’ll have to avoid the temptation.

Stingily has all the motivation he needs. This year saw the birth of his first child, a daughter, that created an entire new perspective.

“I have to provide. I have to think about more than just myself now. I got to provide for her. If I’m not working out, how is she going to eat? Literally. Put all my heart and effort into this.”

But even with Bell’s suspension, the interview took place before the news, Stingily is part of a competitive room. To show he belongs, running backs coach James Saxon has told him he must be more complete player. That’s Saxon’s style, a bluntly honest approach, so his players are crystal clear on what they need to do.

All to prepare him to make the most of his second chance in the NFL and to prove to all those people, and himself, he can make an impact in the league. That’s his goal across these 14 practices and four games.