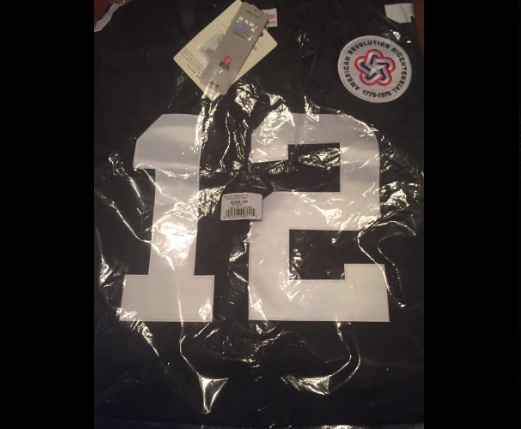 I know it has been a long offseason full of meaningless rankings and lists but trust me, you’re going to want to read this story.

Because for Jamaal Morgain, each Christmas meant one thing: Steelers’ jerseys.

Those jerseys were stolen over 4th of July weekend, but the Pittsburgh Steelers’ organization is making sure he has his most memorable Christmas ever.

Steelers’ Nation lives everywhere. You know that. And Morgain, friends all call him Jae, is living proof. Born, raised, and still living out in California, he’s been a Steelers’ fan all his life. Every “displaced” fan has their story. For some, it’s their parents, who lived in Pittsburgh until the steel mills closed down. For others, they watched the 70s dynasty and couldn’t help but fall in love.

For Morgain, it was all in the name. He grew up in Pittsburg. California. So as a kid, he naturally thought the Pittsburgh Steelers were in his backyard. It wasn’t until he turned eight that his parents finally told him his team played their games over 2500 miles away. But he was already hooked.

“The Steelers were where my heart was,” Morgain, 24 and studying at Sacramento State, tells me in a phone interview Tuesday.

It was Morgain’s grandma who gave him his first jersey when he was eight years old. Troy Polamalu. It was a hand-me-down but to a kid, it might as well be solid gold. That first jersey served as an inspiration to start a die-hard collection. You know the kind. A Steelers’ outfit for every day of the month.

“I remember this like it was yesterday. I was in 7th grade, it was the year the Steelers went to the Super Bowl in ’05 against the Seattle Seahawks. I had a Hines Ward jersey. From then, 2005, 2006, that’s when my jersey collection started growing.”

By this year, Morgain had 16 Steelers’ jerseys. They ranged from Antwaan Randle El, two Ben Roethlisberger’s, and his favorite one, an 80th season bumblee Ryan Clark.

“He’s just knocking people out,” he says of what drew him to be a huge Clark fan. “He’s knocking out Willis McGahee and Wes Welker. And then I built more of a rapport with him when I found out about his sickness. And how he couldn’t play in Denver [due to his sickle cell]. So I really drew to him.”

The collection grew to other apparel. Beanies, hats, and a $250 jacket with each Super Bowl logo stitched into the sleeves.

When Morgain drove back to his apartment from his parent’s house after the 4th of July, they were all gone. A burglar breaking the glass next to his patio, taking his TV, Xbox, shoes, entire Steelers’ collection. All 16 jerseys, the jacket, and hats that were still in good condition.

The TV and the Xbox could be replaced. They were just objects. But his jerseys had meaning.

“When I noticed, my heart just fell. It was just heartbreaking.”

A few days following the incident, after filing a police report and trying to process what happened to him, Morgain took to Twitter to vent.

R.I.P to my beautiful collection. I'll get you guys back I promise ?? pic.twitter.com/lRYEjFONH9

In response, Steelers’ Nation stepped up. Several fans tweeted at the team, relaying Morgain’s story in the hopes the organization could do something in return for a die-hard fan.

“The next morning, I was getting ready to go to school, and that’s when I got the notification that the Steelers were following me. They sent me a message and from there, it was just magic.”

The Steelers apologized for the loss of Morgain jerseys and in an effort to restart his collection, told him to send his address and jersey size. Through the team’s Pro Shop page, they wanted to sent him a gift.

“They gave me a link to their website and they told to pick out any jersey and they were going to get me a jersey to help restart that collection.”

Morgain decided to go a little old school with his jersey choice.

“To pay homage and respect to the Steelers and their history, I started off with a throwback Terry Bradshaw jersey. I never had a throwback jersey at all. That is my first one.”

Thank you @SteelersShop for the amazing jersey ?? my new collection starts today, I'm so grateful for this ⚫️? pic.twitter.com/qWwiMUSe4Z

But the team wasn’t done yet. Yesterday, as a complete surprise, he received a football autographed by rookies Javon Hargrave, Demarcus Ayers, and Tyler Matakevich.

Special thank you to the @steelers for their gift to me. This organization is truly the best! #SteelerNation ⚫️?✊? pic.twitter.com/30dF8CTvpj

We’re very sorry to hear of what happened. We hope this football will get your collection started again. It is autographed by: DT Javon Hargrave, WR Demarcus Ayers, LB Tyler Matakevich.

We hope to see you at Heinz Field this season!

Still, the team wasn’t done. Morgain already has plans to travel to the Steelers/Ravens game on Christmas, his first time in Pittsburgh though not his first Steelers game. The team told him to reach out when he gets to town. Specifics are unknown but you can bet Morgain and his family will be well taken care of. The actions of the team and fans have, according to him, “changed my perspective.”

“When I got that message, my heart started racing faster. I said, is this really my team reaching out to me? On top of that, they’re apologizing for something they have no involvement in. It was just so unreal. And I kid you not, I’m not ashamed to say that I really cried. I legit cried. I was just in tears that this organization took the time to reach out to me.”

“I’m attached to them for life because they came and did something for me.”

In our conversation, Morgain was profuse in his gratefulness for what the team has done to him. For them to show they are above being just a business, meant to make money and win games.

“It’s life changing. I can’t express enough. I personally got them a gift that I told them I plan on handing to them. I also told them to echo my sentiments to Mr. Rooney if they can. It’s more than sports to me now. I feel like this is real life. And I feel like this is an organization that shows they care about their fans.”

He’s equally grateful to Steelers’ Nation who helped spread the word and bring the situation to the team’s attention.

“I’m speechless. I really am speechless. None of this is possible without them. I don’t think any one of them have any idea of just how much they changed my life. It brings emotions out of me when I think that.”

“I haven’t even met some of these people. I probably never will. It’s the power of being a Steelers’ fan. I’m like, wow, it’s a brotherhood.”