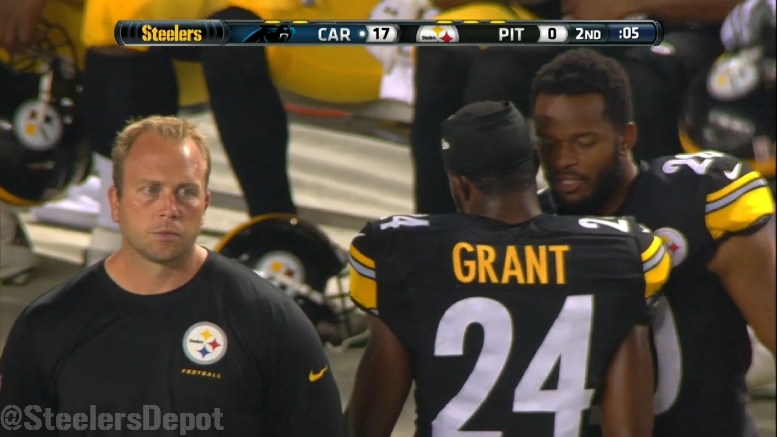 The Pittsburgh Steelers won’t begin training camp for a few more weeks, so, like last year at this same time, I thought we would spend the next week or so talking about a few players that many believe will have a decent shot at making the 2016 final 53-man roster. Basically, these are players that we can’t quite consider locks, but do consider as being on the bubble ahead of the team reporting to Latrobe.

After reading the recap of the player that we highlight, you can cast your vote as to whether or not you think that player will make the final 53-man roster. Each poll will run for three days.

The fourth player up in this series is cornerback Doran Grant.

After being drafted by the Steelers in the fourth-round of last year’s NFL draft, Grant, ultimately failed to make the team’s initial 53-man roster out of training camp as he was waived during the final round of cuts just prior to the start of the regular season. The Ohio State product, however, was signed to the team’s 10-man practice squad and that’s where he remained for the first half of the 2015 season.

Grant was ultimately signed to the Steelers 53-man roster from the practice squad ahead of the team’s Week 9 game against the Oakland Raiders. After being inactive for that game, he dressed for the first time in Week 10 against the Cincinnati Bengals but failed to see any action in that game whatsoever.

While Grant ultimately dressed a few more times late in the season, he was ultimately used sparingly on special teams and logged only one defensive snap. He was then made inactive for both of the Steelers playoff games.

While there were some rumblings that Grant could possibly make a move to safety during the offseason, that ultimately failed to come to fruition. Instead, he reportedly remained working at the cornerback position during the team’s OTA and mandatory minicamp practices.

As things stand right now, Grant is buried on the Steelers cornerback depth chart behind the likes of William Gay, Ross Cockrell, Senquez Golson and rookie first-round draft pick Artie Burns. He is set to battle for the team’s fifth cornerback spot this year during training camp and that means he must make an impact on special teams during the preseason in order to secure himself a spot on the team’s 53-man roster.

While Grant appears to be inside the roster bubble ahead of training camp, it’s far from guaranteed that he will remain there.