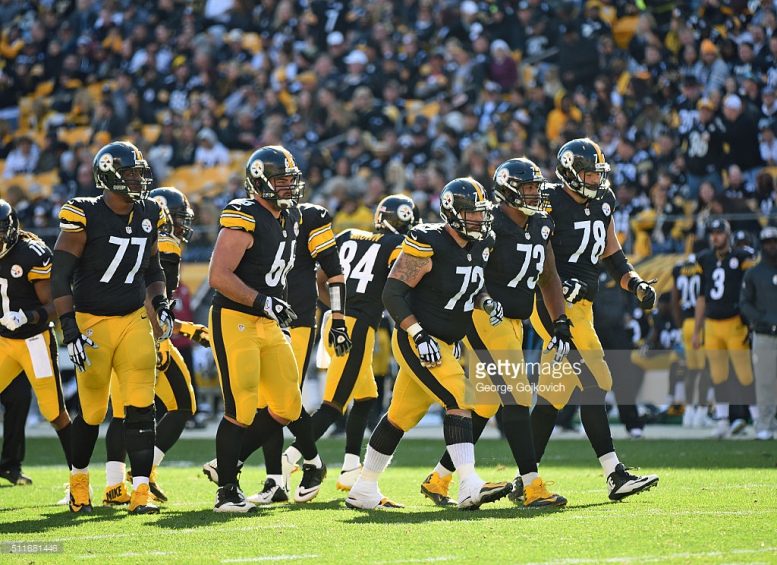 Just how good will the Pittsburgh Steelers offensive line be in 2016? Well, if you believe the recent rankings released by Pro Football Focus, the Steelers unit enters the season ranked 14th overall. So in short, the middle of the pack.

Now, before we get into arguing that the Steelers offensive line should be ranked higher than 14th, let’s look at some of PFF’s analysis.

First off, PFF has the Steelers starters from left to right listed as Ryan Harris, Ramon Foster, Maurkice Pouncey, David DeCastro and Marcus Gilbert. While that certainly could wind up being the case, I will be surprised if Alejandro Villanueva doesn’t beat out Harris for the starting left tackle spot. While Villanueva is far from being considered a Pro Bowl left tackle, he made strides in the right direction last season after taking over the starting job in Week 7 after Kelvin Beachum was lost for the year with a knee injury. Sure, Harris was signed this offseason after Beachum left via free agency and while he does make more than Villanueva does, one has to think the Steelers want and hope the Army product to be their starter for the next few years.

As far as the Steelers roster depth listed by PFF goes, they only have Villanueva, Cody Wallace and Chris Hubbard listed. For starters, Hubbard’s certainly not a lock to make the final 53-man roster this year out of training camp as he figures to do battle against B.J. Finney, who might just wind up being the better interior option of the two.

Next, while Wallace has too many warts to list in this post, he did play all 16 games last season at center on a team that made to it the Divisional Round of the playoffs. I also suppose that PFF forgot all about the Steelers drafting Jerald Hawkins in the fourth round as well. While we all hope he doesn’t have to play a single snap during his rookie season, it will be a huge disappointment if he doesn’t make the final 53-man roster as a fourth tackle.

Here is PFF’s overall analysis of the Steelers offensive line:

The Steelers have many key pieces in place to produce a very good O-line next season. David DeCastro and Ramon Foster were both among the top 16 guards in the league. Maurkice Pouncey was a top-three center in 2014, but missed all of 2015 with injury. If everyone stays healthy in 2016, the line should be improved from last year, as Pouncey is a major step above Wallace, and Harris is slightly better than Villanueva. However, the left tackle position is still concerning, and if anyone is injured, Pittsburgh doesn’t have a lot of depth.

As far as potential injuries go, that’s a huge question mark when it comes to any team. However, assuming Foster, Pouncey, DeCastro and Gilbert don’t suffer any serious long-term injuries, the Steelers offensive line unit should be just fine and quite possibly could wind up being the best Pittsburgh has had in several years. Pouncey and DeCastro are Pro Bowlers and you could make an argument that Gilbert is the most underrated right tackle in the entire NFL. While not flashy, Foster is as consistent as they come.

The left tackle spot will play itself out in the coming weeks and I will be fine with whatever the results are. Harris, by the way, was the starting left tackle on a Super Bowl-winning Denver Broncos last year. He can play on both sides should the need ever arise. I was ecstatic when the Steelers signed him and never saw that move coming.

Can this offensive line overcome one serious injury during the 2016 season? Certainly, as they overcame two of them last season, and three if you count Mike Adams spending the entire season on the PUP list. Isn’t that what depth and rankings are all about?

Now, I’m not here to say that this year’s Steelers offensive line is the best in the league, but they should most definitely be ranked in the top 10 at the very least. Do any of you disagree with me, or am I just preaching to the choir?