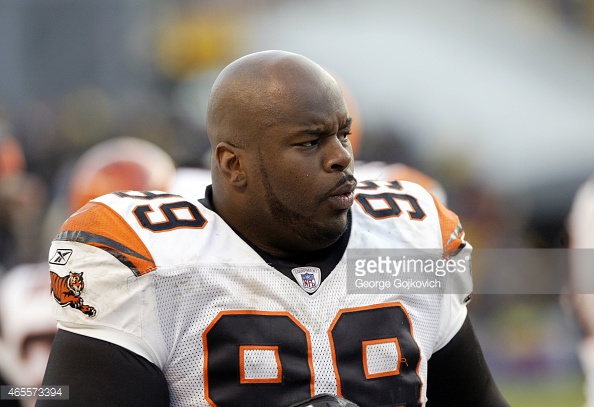 Truth time. I had never heard of Gibson before. Just found his name poking around some old rosters online. You know, the stuff cool kids do. If you’re ignorant like me, Gibson was a defensive tackle drafted by the team in the 4th round of 1995. He went to Notre Dame, a prized recruit after being named the USA Today High School Player of the Year in 1989.

In four years with Pittsburgh, he recorded 5.5 sacks, including a career high of 2.5 (more than Jarvis Jones, sorry!) in 1996. He spent another five years in Cincinnati seeing more statistical success. Gibson registered a career high 4.5 sacks in his first season with the Bengals, followed up by four more in 2000. In total, he recorded 12 sacks in 57 starts for the Bengals. 1.5 of those came against the Steelers.

He would rang up his cleats after the 2003 season, 13 years ago. Which reminds us…we are all so old.

A “Where Are They Now” from Steelers.com gave a nice review of what Gibson was up to in 2011. Gibson, as told to Teresa Varley, participated in one of the NFL’s Broadcasting Camps two years earlier. He also got into coaching, serving under Don Beebe at an Illinois high school.

In the article, he recalled his time in Pittsburgh and said, despite playing in Cincinnati one more year than Pittsburgh, the Steelers are the only team he keeps an interest in.

“Pittsburgh is the only team I watch. I have fond memories of Cincinnati, had a lot of fun. But there is something magic about the Steelers. If I have an autograph session and I have pictures from Cincinnati and Pittsburgh, nobody wants the Cincinnati picture and I started more for them. They want the Steelers picture. I always watch the Steelers.”

He also said the most Pittsburgh sentence ever.

“You get a sack in Pittsburgh they talk about you at the Giant Eagle the next week.”

I can almost imagine him holding a Primanti’s sandwich and an Iron City beer in the either.

Gibson moved onto Evanston High School, originally joining as the defensive line coach. But in an unfortunate turn, the team’s defensive coordinator, Steve King, the man who convinced Gibson to enlist with the team, passed away in 2014. Gibson was elevated as the “defensive leader,” not specifically coordinator, out of respect for King.

Last year, Gibson took another job, finally being named the head coach at Romeoville, his alma mater. They went 1-8 but to be fair, had only four returning players from a 2-7 squad. Growing pains are expected.

We’ll leave you with this video. A clip of Gibson recording a sack in a 1994 loss to Florida State. In it, you see a shot of Lou Holtz, some apparent cell phone interference, and a watermark, in case you were trying to steal such precious footage.

You can view it at the link here. The video won’t embed because the Football Gods are apparently angry at me.

Oliver Gibson, your blast from the past.