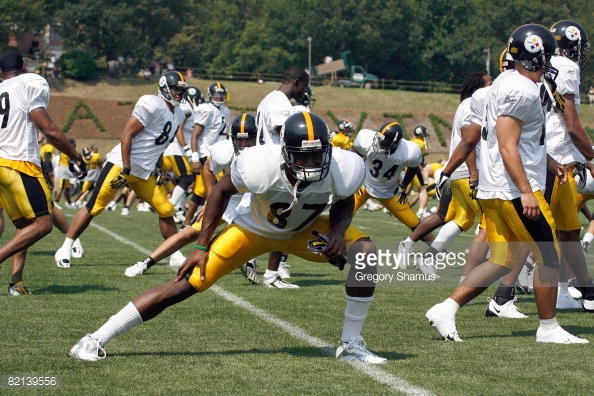 Today’s blast from the past is wide receiver Micah Rucker. Chicks dig scars and fans love tall receivers. And there haven’t been many to come through Pittsburgh that were as tall as Rucker. His height is something of a debate, the most boring discussion ever, ranging from a shade under 6’6 (per NFL Draft Scout) all the way up to 6’9 (on his Wikipedia).

His college career began at Minnesota but after two years and just four catches to his name, he transferred to Eastern Illinois. There he dominated, grabbing 104 passes for over 1700 yards in two seasons.

Those measurables and numbers weren’t enough to warrant a selection in the 2008 draft but the Steelers scooped him up as a UDFA. Rucker only made it through camp, spending time with the Kansas City Chiefs and New York Giants during his career. He was later shuffled down to the AFL, He played three games with the Chicago Rush, catching 4 touchdown passes, before an Achilles’ injury led to his release.

Rucker attempted an NFL comeback, bulking up to 244 pounds and creating this highlight tape of him catching passes and running routes on air.

But no team ever came calling and there’s no record of him playing professional football since 2012.

The only other notable note is the apparent obsession from one Giants fan. Enough that someone on the SB Nation team site made a parody interview article. That’s a candidate for the most obscure thing the Internet could provide.

Rucker is just another name on the list of players remembered for their height. He joins Matt Trannon, a one-camp wonder, and Walter Young, who like a student in his sixth year of college, hung around for what felt like way too long.

We’ll leave you with one of three highlight videos that exist on what looks to be his own YouTube channel. He has no subscribers so be a pal and join up.

Micah Rucker, your blast from the past.