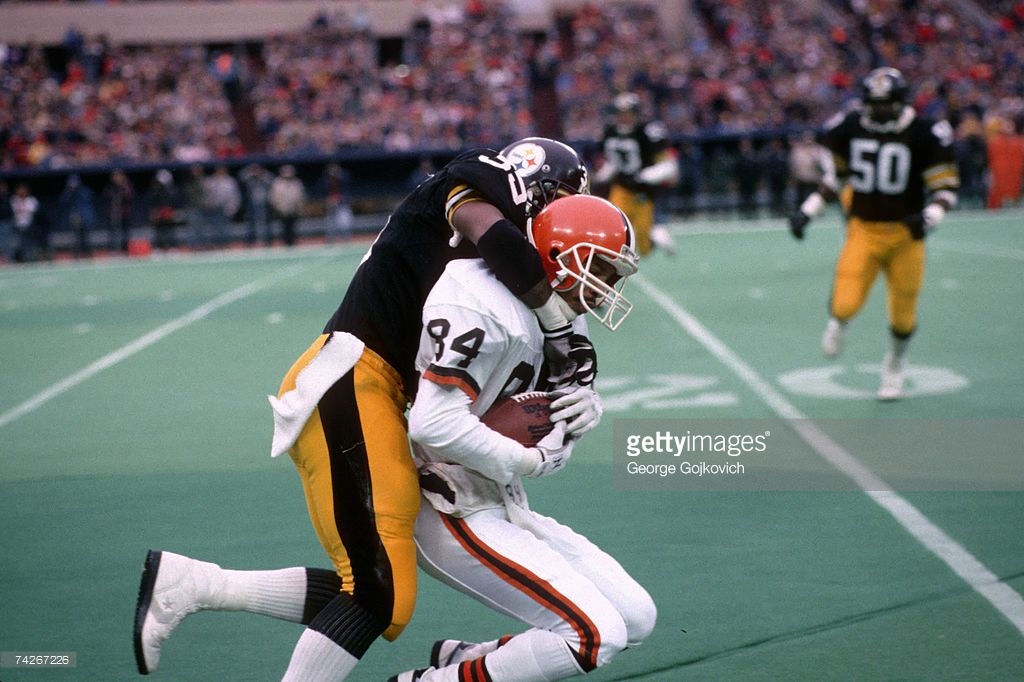 We usually don’t reach this far back in our selections but at reader request, we’re taking a look at Hall.

Drafted by Chuck Noll in the second round of the 1987 draft, Hall made an immediate, and statistically, biggest impact in his rookie year. Per Pro Football Reference, he started 12 games, picked off three passes, and scored two defensive touchdowns.

His presence was felt immediately. In his first game ever, Hall picked off Joe Montana and returned a fumble 50 yards for a touchdown. Pittsburgh would go on to win 30-17, one of only two losses Bill Walsh’s team would suffer in the regular season.

Hall also had a pick six of Boomer Esasion in the third quarter of a 23-20 win over the Bengals a month later. Not a bad way to begin in a career.His physical style earned It earned him the nickname “Beltin” Delton from fans. That’s what he told the PPG in their own “Where Are They Now” back in 2003.

“That came from the Steelers fans after I got here. They gave that to me because of the way I hit people. I liked to come up and hit guys hard. I liked to get those skull and crossbones for a big hit.”

But Hall would only make seven additional starts over the rest of his Steelers’ career, picking off just two more passes. Injuries and his young man’s attitude took their toll, as Hall told the Pittsburgh Daily Sports Bulletin in 2011.

In 1988 and 1989, Hall broke each of his wrists. He admitted he got used to staying up late, partying, and not taking care of himself as well as he should. From the interview.

“Coach Noll always said not to burn the candle at both ends. I should have listened to him.”

In 1989, Hall was arrested for public drunkenness and again in 1991 for simple assault.

In 1992, right after signing with the San Diego Chargers, Hall was arrested in Pittsburgh on charges of burglary. It appears there was a dispute with a woman, Hall entering her apartment (with a key, though without permission) to take a TV and stereo.

And in 1993, after injuring his Achilles in the playoffs with San Diego, he was arrested on suspicion of DUI and, per the LA Times,  “allegedly head-butting a sheriff’s deputy” after being taken down to the station.

I was unable to find the final result of any of those cases.

The Chargers cut him with a failed physical, stemming from that Achilles’ injury, in August of 1993. He was released on the same day as former Steeler Keith Willis was by the Buffalo Bills.

I found a couple more recent, and more positive, things on Hall. In 2011, he was invited by the Steelers to work one of their fantasy camps. In that 2011 interview with the Daily Sports Bulletin, he said he was working as a shift manager for a Giant Eagle (a grocery store, for those out of state).

And this past May, Hall was inducted into his hometown county’s Hall of Fame.

A year ago, Reddit user SmokrsKoff wrote that a man, calling himself Delton Hall, asked him for cab money to reach his daughter, who is locked out of her car. The guy gives him $30, “Hall” says he’ll call the Redditor in a couple hours (for a future invite to a party) and never does. The user links to another Reddit thread – that’s now dead – that apparently showed he was scammed. Other Redditors confirmed similar stories, though they don’t explicitly say if this person was referring to himself as Hall.

Click that link if the story doesn’t make sense. Paraphrased the best I could.

To be clear, I’m not saying that was actually Delton Hall. It could have easily been someone posing as him and that feels more likely. I never found out the entire story. But it happened frequently enough that the UNC-Greensboro Police warned the community about it on Facebook in November.

The UNCG Police are trying to locate a subject that presents himself as “Delton Dwayne Hall” a former Greensboro resident and professional football player. This subject solicits money from individuals “To get to his daughter located at the Tanger Outlets.” This subject has perpetrated the same scam at other universities and malls in NC. If you see or are approached by this person, please contact the UNCG Police at 336.334.4444 or through the LiveSafe mobile security app”

Man, that’s what happens sometimes when I research these things. I always start by looking up their stats on Pro Football Reference. Where I’ll end up, I never know. Sometimes, it’s on a Reddit scam alert page. The Internet is weird.

Delton Hall, your blast from the past.