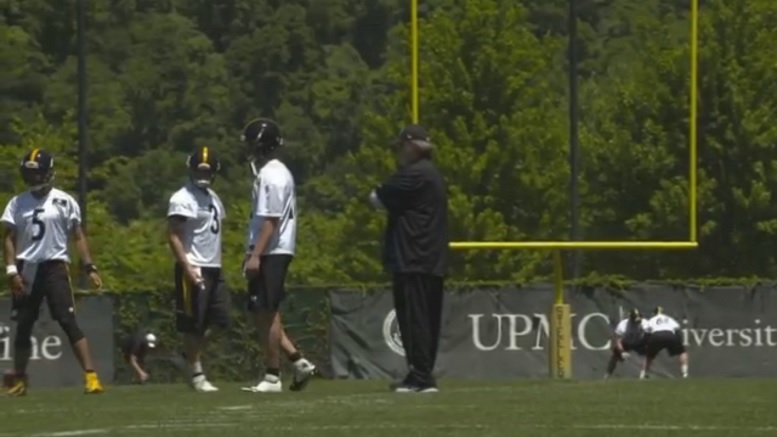 During the remainder of the offseason the Pittsburgh Steelers need to figure out whether Bruce Gradkowski or Landry Jones will be the team’s second-string quarterback behind starter Ben Roethlisberger. At the conclusion of the team’s Wednesday minicamp practice, Steelers head coach Mike Tomlin was first asked if he knew when he would determine the backup quarterback pecking order and second if it really matters due to the experience that Gradkowski already has in the league.

“I haven’t even really thought about it in that perspective,” said Tomlin. “Sometimes when you start to try to shake those things, you make the story. We snap the ball enough, those things will become very evident. In some instances, painfully evident. That’s just a part of the process. I make a conscious effort to go into it in that spirit, just to commit to continually snapping the ball and put guys in competitive situations, and let their play sort them out. Thankfully there is quite enough time for that. The schedule allots that. That’s why we really enjoy training camp and the process that it is.”

Gradkowski was re-signed during the offseason after he was able to prove that the shoulder injury that forced him to miss the entire 2015 season had been fully rehabilitated. As for Jones, who is entering the final year of his rookie contract, Gradkowski’s injury, along with the hamstring injury suffered by last year’s No. 2 quarterback Mike Vick, resulted in the Oklahoma product finally seeing his first playing time during a regular season while Roethlisberger missed four games with his knee injury. While Jones did play better than expected when finally given the opportunity, Tomlin refused to anoint him the team’s backup quarterback moving forward immediately after the 2015 season ended.

Part of Jones’ improved play last season can probably be credited to the extraordinary amount of playing time he received last year in the team’s five preseason games. Tomlin was asked Wednesday if he will be able to get Jones that much work again this year during the preseason and in typical Tomlin fashion his response was quite amusing.

“It would be impossible,” said Tomlin. “I guarantee Landry probably had more snaps than anybody in the history of NFL football in preseason football. We played five [preseason] games. Somebody do that research, I bet you he’s the most seasoned preseason quarterback in NFL history last year.”

In case you’re curious, Jones played 229 total snaps last year during the preseason, according to the NFL game books. Our charting, however, indicates that Jones played one more snap than that. It was indeed the most snaps played by a quarterback last year during the preseason and while it’s probably next to impossible to find out whether or not that was an all-time NFL preseason record, it’s hard to imagine another quarterback has ever played more.

For now, we’ll have to sit back and wait and see how the backup quarterback spot for the Steelers ultimately plays out and it shouldn’t be hard to determine on the outside based on the evidence presented to us during both training camp and the preseason.