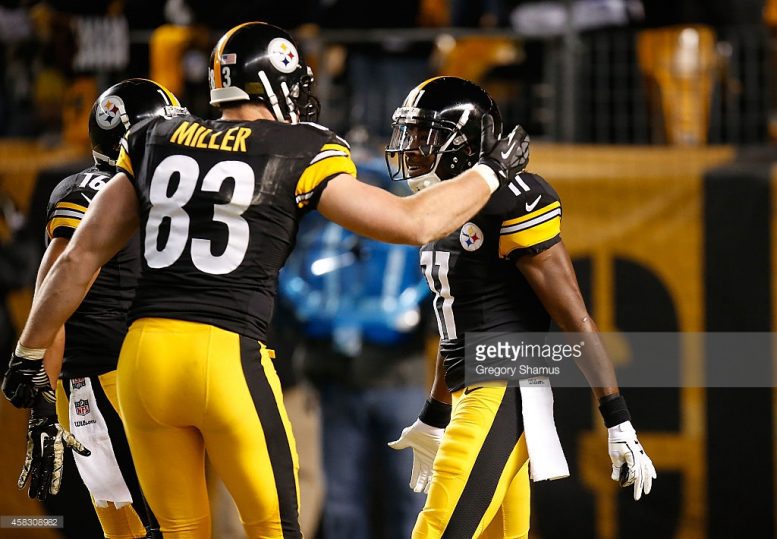 Pittsburgh Steelers wide receiver Markus Wheaton played quite extensively in the slot last year for the first time during his NFL career and while the former third-round pick did manage to eventually take to the position change as the season wore on, he admitted in a Thursday interview on SiriusXM NFL Radio that he still had his set of challenges associated with it.

“I loved the opportunity of getting to move to the slot because I learned a lot,” said Wheaton, who caught 44 passes for 749 yards last season. “Obviously, I played outside all of my life and moving to the slot, you don’t think it’s a huge transition going into it, you still think it’s wide receiver, still the same things I’ve been doing, but I saw a lot more things that hadn’t seen in the past. [I] dealt with a lot more issues, a lot more safeties, outside linebackers and things I had to navigate.

“And I think building chemistry was the biggest thing for a slot to do and I think with all of the quarterback switches we had last year with Ben [Roethlisberger] going down and Mike Vick coming in, and then Landry Jones coming in and then Ben coming back, it was hard for me to get going to keep that chemistry, let alone build it.”

Chemistry is certainly key in the game of football and especially at the wide receiver position. With that said, Wheaton admitted Thursday that he’ll now have to build chemistry with new tight end Ladarius Green very quickly now that he’ll be the one to replace veteran Heath Miller, who retired earlier in the offseason.

“Me and Heath I think built a really good relationship when I moved to the slot, because I had to work with him a lot more,” said Wheaton. “Obviously I’m right next to him most of the time when we’re both on the field and we communicated a ton, mostly him talking to me about the hots and who we’re hot off of and what’s going on. When I’m unsure about something, obviously I’m going to reach out to him and not having him there it scares me a little bit. I think that’s really what’s motivated me to really pick up the offensive protections and just to know the playbook in and out. I won’t have Heath there anymore. I’ll have a new guy that’s new to our system that I’ll probably be helping out the way Heath was helping me out. So it’s definitely a role I’m embracing and I know that guy will probably need me, just like I needed Heath.”

Wheaton will unfortunately not likely to be able to start building his chemistry on the field with Green until the start of training camp being as the team’s new tight end is expected to miss all of the team’s OTA practices and mandatory minicamp as he continues to rehab his surgically repaired ankle.

“With him [Ladarius] coming in, I hear that he’s very athletic. He hasn’t been out there on the field with us I think due to injury, so I’m excited to see what he can do,” said Wheaton.

2016 is certainly a big year for Wheaton as he has the chance to be one of the top unrestricted free agent wide receivers in the league next offseason.