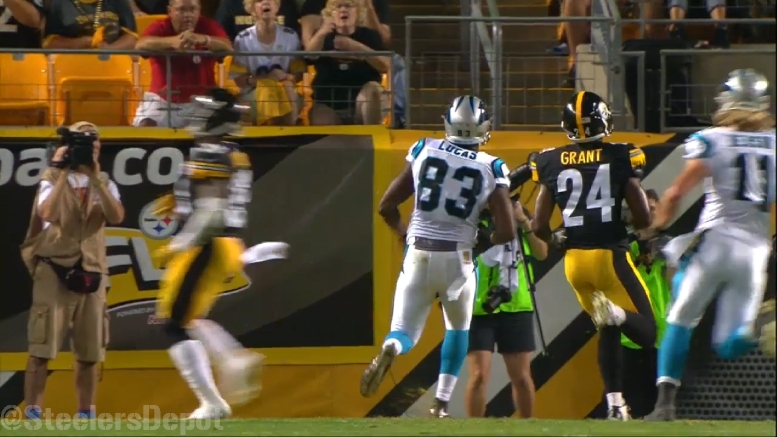 Show me something, Doran Grant.

A product of Ohio State, Doran Grant was a fourth-round draft pick of the Steelers last season in a year in which they doubled down at the cornerback position due to the fact that they were hurting for both talent and depth.

At the time, the general impression was that the 5’10”, 200-pounder was good value where the Steelers got him, but at this point, many people seem to be writing him off, which means that he is entering a critical offseason in which he has to show everybody what he can do.

Grant made the initial 53-man roster, but was released the following day to make room for players claimed off waivers. He himself cleared waivers, which was a red flag to many, and was re-signed to the practice squad, only to be promoted back to the 53-man roster by midseason, though he spent much of that time inactive, and when active, was mostly a sparse contributor on special teams.

Grant’s future is so murky right now that many, even players and coaches, have been talking about him potentially moving to safety, though that is partly due to the fact that he is seen as a player with the skill set to do that, and some teams may have even evaluated him as a safety in spite of the fact that he played cornerback throughout his college career.

For the time being, however, he is with the cornerbacks, and ostensibly fifth on the depth chart, yet we have heard some sparse positive rumblings about players such as Montell Garner and Donald Washington, the latter a veteran (and also a cornerback who played safety at the NFL level).

Grant’s roster spot is no more guaranteed now than it was last year, even with the loss of a few cornerbacks during the offseason. He will have to earn his roster spot, mostly on special teams.

Where he struggled in the preseason last year was in his Cover 2 assignments and in reading double moves, so he will have to show improvement in those areas. In spite of being regarded as a strong tackler, he also missed a couple early in the preseason, as I remember. Right now, he’s a bit of a forgotten man after being the 121st overall pick in 2015.