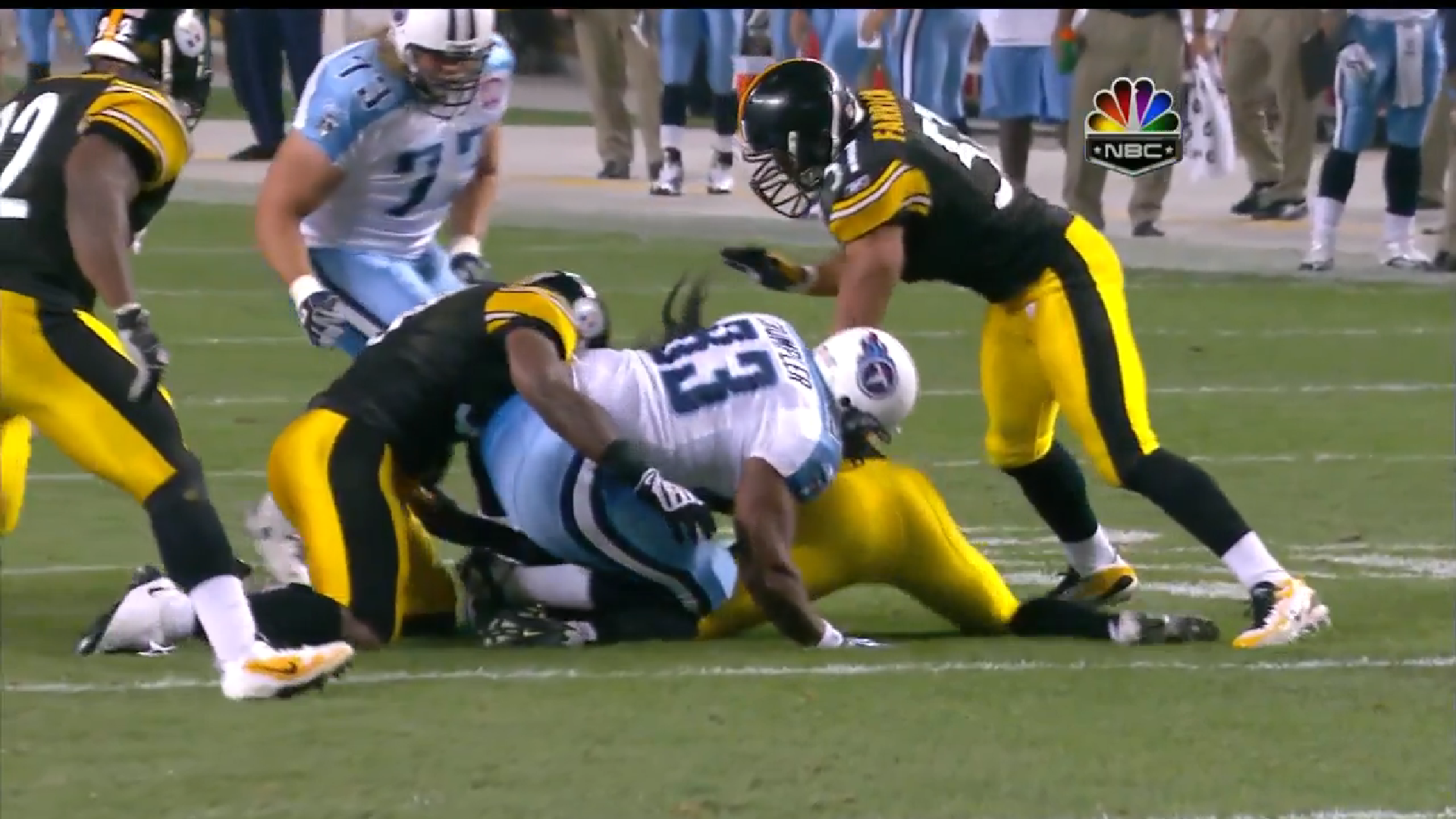 You may have read an article written by Alex Kozora a few days ago in which he makes, as always, a compelling case for the Pittsburgh Steelers leaving Antonio Brown right where he is, as the team’s starting punt returner, a role that he has openly valued having the opportunity to hold, even if he is catching 136 passes on offense.

Aside from the fact that Brown has elite-level athletic and reading skills as a return man—he was a Pro Bowl returner in 2011, the only year he was allowed to consistently return both punts and kicks before he took on bigger role in the offense—there is also the fact, as Alex pointed out, that he is smart about his health when he is on returns.

Not only does he rarely take many hard hits during returns, often managing to get out of bounds or escaping serious contact with only glancing blows, he is also a player who knows to take a fair catch when there is a questionable amount of time to make a move once receiving the ball, at least for a player of his importance.

This is a strong argument and there is no debating the points that he made. But that still doesn’t convince me that they should not make the effort to find a reasonable replacement for Brown to take him off of punt returns if they can find a fair facsimile in somebody like Eli Rogers or Demarcus Ayers, the latter being drafted specifically because special teams coach Danny Smith was impressed with his return skills.

There are two aspects of the point that I wish the make, the first being the more obvious in reducing the possibility of Brown being injured on a punt return to zero. Alex notes that it’s been a rather long time since a Steelers returner has been injured seriously.

But the fact of the matter is that it only takes one freak incident in order to change the narrative. That is actually exactly what happened in 2009, when Troy Polamalu suffered a sprained MCL while attempting to recover a fumble during a field goal drill. Polamalu went for the ball and had a rather large Titans player whose last name was Crumpler fall on his knee, an injury that had repercussions for the rest of that season.

Why is an All-World safety playing on a field goal unit, was the prevailing question in the week that followed that injury. Why even risk the possibility of having such a freak accident occur to such an important piece of the team in a far less significant role? And just for perspective, this is how far away from the ball Polamalu was after the field goal attempt was blocked. Total freak play, but they happen, and they carry significant consequences when they do. 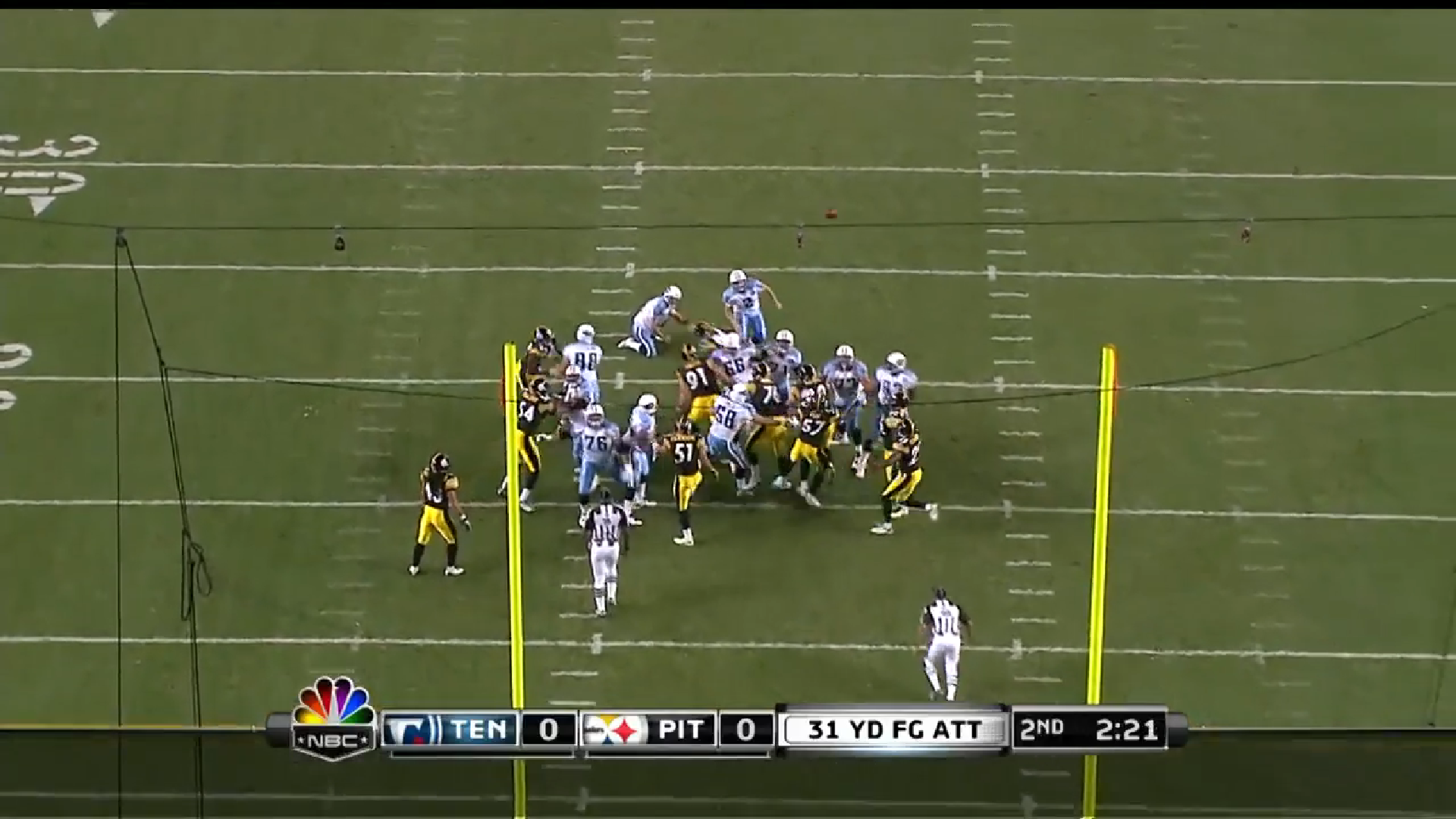 Granted, a punt return has a far greater chance of impacting a game than does the typical participation of a field goal unit—though that unit did block the field goal, resulting in the loose ball—but the point remains that there would be an uproar if the Steelers lost their All-World receiver on a punt return. Call it living in my fears, I just don’t want the possibility to exist if there is a reasonable alternative. We developed fear as a species. It keeps us alive.

And that brings me to my second point. A player such as Rogers or Ayers would not have to play as conservatively as Brown does, who signals for about as many fair catches as anybody in the league. In his career, Brown has fielded 160 punts and called for 87 fair catches, which is 35 percent of his total opportunities.

That is over a third of punts in which the ball was not advanced at all. If the Steelers had a less conservative returner back there with respect to exposing himself to more high-risk impacts, that could lead to even more opportunities. And not that it’s crushing, but he has fumbled seven times on punt returns, including six times in the past four years.

It’s far from a sure thing that the Steelers have another returner in camp who can come even close to the value that Brown brings to the punt returner position, and if that proves to be the case, then he absolutely should remain in that role. Let’s just say that I’m in favor of heavily exploring the alternatives.