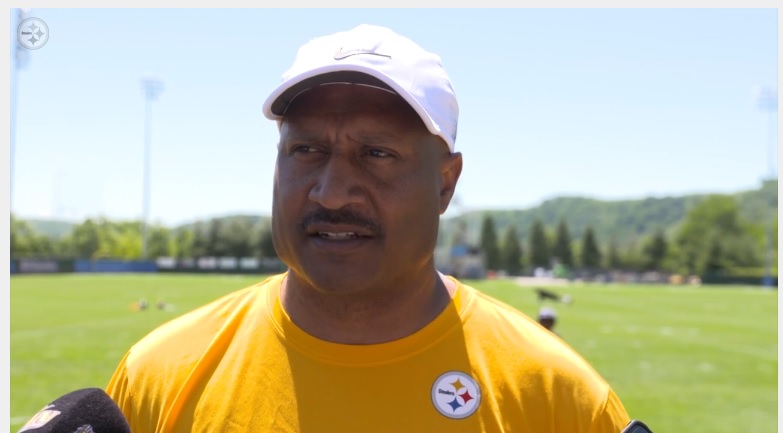 The offseason is always a great opportunity for the lay fan to get to hear a lot more often from the Pittsburgh Steelers coaching staff, as they are more exposed to the media in the spring and summer than they are by the time the regular season rolls along. It’s particularly nice to get to hear from them regularly during OTAs.

I’m sure you can imagine the routine bombardment of questions that Butler must receive at every opportunity to provide some sort of update, meaningless or otherwise, about the ‘progress’ of Burns in his eighth professional NFL practice.

Presumably asked something at least relatively along those lines, Butler said, as Kinkhabwala Tweeted yesterday, that “the most important coach” that Artie Burns will have this year is not himself, nor head coach Mike Tomlin, nor even defensive backs coach Carnell Lake. It’s seventh-year All-Pro wide receiver Antonio Brown.

Burns, who turned 21 last month following a relatively productive but inconsistent junior season at Miami that was marked by personal tragedy, is not expected to immediately play a big role in the defense, but he was obviously drafted with every intention of eventually entering the starting lineup and, presumably, becoming their top cornerback, in the vein of an Ike Taylor with turnover abilities.

While his relative inexperience will require a great deal from the coaching staff in order to put the fine touches to his craft to best ensure that he is able to do his job, there is sometimes no better teacher than getting your mouth piece handed to you after being soundly beaten by the professional lining up across from you, especially when he is the best in the business.

When the Steelers drafted both wide receiver Mike Wallace and cornerback Keenan Lewis in the third round of the 2009 NFL Draft, the two childhood friends spent a lot of time in practice going up against one another, making each other better for it. Their own personal bond helped keep each rep from being a chance for a breather, but instead another opportunity to show up your friend.

Burns and Brown are not necessarily friends in that sense, nor are they close in terms of their level of development, but if you could put any wide receiver up against a cornerback in the hopes of forcing him to learn how to take every rep seriously, Brown might be the top name on that list.

Whenever William Gay gets a breather in practice, perhaps due to a contusion of the birth certificate, Burns should see plenty of opportunities to consistently match up with the league’s best wide receiver, who can teach him lessons about defending an elite wide receiver that no coach, or words, can convey on their own.