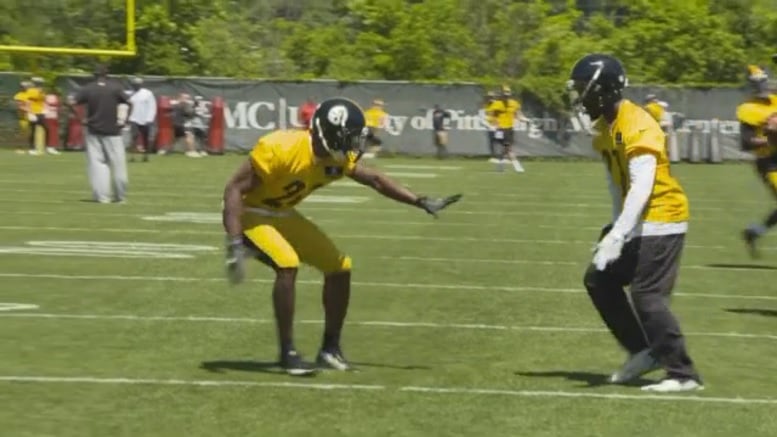 Including the team’s rookie minicamp, Pittsburgh Steelers cornerback Artie Burns has now participated in 13 total practices as he heads into day-two of the annual mandatory minicamp. That’s likely more than enough time for Steelers head coach Mike Tomlin to get a good grasp on what this year’s first-round draft pick out of Miami needs to improve on heading into training camp and following Tuesday’s practice, he was asked to evaluate Burns.

While Tomlin’s answer was brief, it appears as though Burns is coming along nicely in his development and especially when it comes to how he’s receiving and processing information that’s being given to him.

“He’s a competitor,” said Tomlin of Burns. “He’s out here every day working to get better, not only in terms of what to do and technique, but conditioning, the things that are specific to his job and professional football. He does a good job of listening to guys and that’s a good sign. Young guys with answers are scary. He doesn’t appear to have all the answers, he’s got questions and that’s good.”

The fact that Burns is using his one mouth and two ears correctly during the team’s annual football in shorts sessions is encouraging and it will be important that he retains all of the information that he’s learned over the course of the last four weeks for when he hits the field again during training camp. Like it or not, Burns’ football IQ probably needs quite a bit of sharpening as not only did he enter the NFL as an underclassman, he also missed valuable offseason practice time while at Miami due to him running track.

It’s comforting knowing that Burns is not only learning from his more experienced defensive teammates such as veteran cornerback William Gay, but from a few that play offense as well. One of those offensive players is obviously wide receiver Antonio Brown, who Burns has now had the opportunity to go up against several times. According to Aditi Kinkhabwala of the NFL Network, Brown gave Burns some advice during the team’s Tuesday practice.

“I told him, ‘If you can cover me, it’s going to make the game easier,'” Brown said.

Burns should definitely listen to Brown.