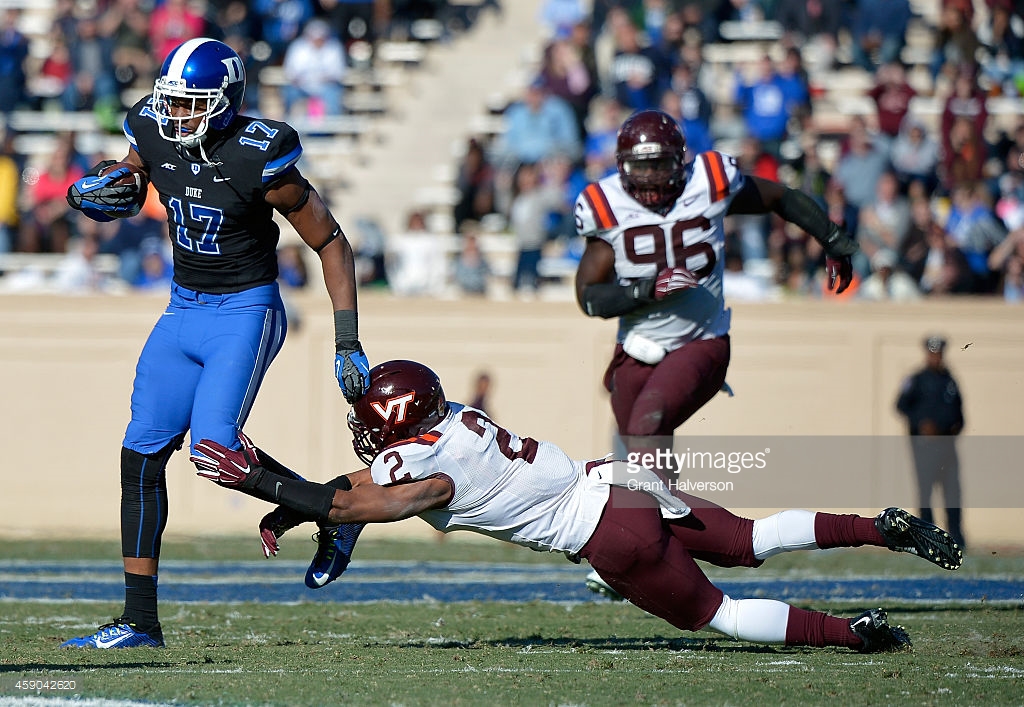 Most people wake up every morning, grab their coffee, brush their teeth, get dressed for work. It’s their routine and there’s comfort in that. Anyone who’s been around someone who hasn’t had their morning cup of joe can attest to that. Change that routine and everything gets out of whack.

Pittsburgh Steelers’ wide receiver Issac Blakeney knows all about changing routines. He’s been a linebacker, a safety, a tight end. Size was never the issue, a 6’4, 220+ pound body. Neither was athleticism, a long strider and track All-American who jumped over 36 inches at his Pro Day. It was that consistency and comfort. Having the ability to wake up, have a cup of coffee, and play the same position he has for years.

Pittsburgh is giving him the chance to do that. As a receiver, Blakeney, wholly unknown to most, has the ability to make some serious noise along the sleepy, rolling hills of Latrobe.

Football didn’t grab him right away. Basketball did. And he was darn good at it. Blakeney led his high school team to a 32-1 record during his senior year. Earning MVP in state title game, he scored 24 points and grabbed 15 boards in a victory.

So basketball was the first sport he stuck to. Football came later. He dabbled in the gridiron during middle school before finally sticking with it in high school. As he tells me in an interview yesterday, his decision came at the recommendation of the head coach. Someone who saw his talent and had the gut feeling he was somebody who could earn a scholarship.

“I started out with football to stay in shape during the offseason. Initially, I didn’t even want to play football, but the head coach from my high school talked me into it. To give it a try, to stay in shape, you never know, you can get a scholarship. Because I never really played it in middle school. So really I didn’t have any intention of making it this far. But God works in mysterious ways.”

He played quarterback his freshman season but moved to receiver for the next three while seeing a lot of action in the secondary. His coaches’ words rang true and though not a highly touted prospect, he earned a scholarship to Duke.

Duke didn’t know what to do with him. Blakeney became a band-aid of sorts, stuck on and ripped off whenever the team suffered an injury or needed additional depth.

Serving as that sort of Swiss Army knife was predictably difficult, but looking back, he recognizes the positives. And if it was for the good of the team, he was onboard.

“[Duke head coach David Cutcliffe] knows what he’s doing so I trusted him throughout the process. I wanted to be a team guy. Usually, the position I played was based on injury need and team need. So I felt like it was a selfless act and I just wanted to show I was committed to the team and do whatever it takes to win.”

It wasn’t until his final two years that he played receiver. But the comfort was reflected in his production. He caught 11 touchdowns across 2013 and 2014, second only behind Jamison Crowder. Perhaps there would be jealousy between any other two players but Blakeney and Crowder have nothing of the kind.

They grew up together in Monroe, North Carolina. A lone back road separating their houses. Crowder had the space for a football field, Blakeney the hoop for basketball. They talk every day now, helping each other get through the daily struggles football presents, problems only those performing at the highest level can empathize with.

“We’ve been through a lot of the same things so we communicate a lot. We go through the same struggles and problems and difficulties so we try to lean on each other for understanding. Because a lot of people can’t relate what we’re going through. We’ve been fortunate.”

The duo even spent time together last season in Washington, where Crowder was drafted and Blakeney signed during the season. But a shoulder injury ended Blakeney’s season and as the new year began, so did the hunt for a new team.

Blakeney wasn’t without suitors. He had gone through workouts, fielded offers from a couple teams. The plan was to take a little time to think it through. Until Pittsburgh called him into town for a workout, Mike Tomlin and Kevin Colbert overseeing it. They made the decision an easy one.

“I just felt like Pittsburgh was a very great situation. I’ve been fortunate enough, the two teams I’ve played for previously, they were great franchises. And some of the stories I hear about from some of my friends in other organizations, when you’re in a winning organization, things run more smoothly. It’s a lot more fair. It’s about the grind, not about the politics.”

“So when the Pittsburgh Steelers offered me, it was a no brainer.”

That’s certainly a common feeling for those who’ve been apart of the organization. Great front office, strong coaches, talented players. A culture of winning. As Blakeney tells it, they already have things figured out.

“The intensity of how hard you gotta work to win. The two teams I’ve been on, San Francisco, a lot of those guys are gone and the Redskins, they’re coming along as a recent. But the Steelers on the other hand, they have a lot of guys who have been there. Have won Super Bowls. Coaches who have been there. So they know what it takes and they can tell you exactly what you have to do to get there.”

“Other teams, I don’t want to say they’re guessing, but they’re still trying to figure things out. But in Pittsburgh, the intensity the work ethic and how hard guys go, you can tell they’ve been there before and know what it takes.”

There is something more tangible which separates Pittsburgh from where he’s been. Beyond the feel-good element. Blakeney describes the Steelers offense as more flexible, the receivers having the freedom to do the one thing all receivers, big or small, must accomplish: get open.

“I think the biggest thing in Pittsburgh is learning how to adjust on the fly. I feel like their offense is so good because they don’t sit around and wait for the defense to do something so they can adjust. Their offense is based on what the defense is giving us. So it gives the receiver more options, you can use your skills to get open. You don’t feel very robotic.”

Of course, Blakeney has to grow a lot as a receiver in a very short amount of time. He’s the first to admit he’s behind in the technique, the nuances of the position. Unlike others, he hasn’t gotten to play receiver every day since the 7th grade.

Tasked with molding him is the old school Richard Mann, who’s been coaching wide receivers since 1970. That’s 22 years longer than Blakeney has been alive. There’s no one better for the job. Mann missed the beginning portion of the spring recovering from surgery but returned for minicamp. Blakeney’s already felt the benefit of having him on the field, assessing and correcting him during practice.

“But as minicamp came along he was out there on the field. I really like it. He’s already becoming one of my favorites coaches because he’s teaching me a lot in such a short amount of time.”

There’s no question his competition is daunting. Antonio Brown, Markus Wheaton, Sammie Coates, and Darrius Heyward-Bey are all locks to make this squad. But it’s those players who give Blakeney plenty of motivation – and advice – on making the team.

He credits Heyward-Bey as a mentor. The two watch film together with Heyward-Bey pointing put details out quizzing Blakeney on them. The work ethic of DHB and Brown is infectious and though Blakeney is a vastly different body type than Brown, it’s the one thing he can emulate.

“We always say if AB ain’t tired, you ain’t tired, and AB is never tired, so you never have room to be tired. So that’s our little rule.”

“He’s full speed with a smile on his face. He’s the top conditioned guy I think I’ve ever seen play football. He’ll run for days, still be smiling and still be laughing. Never see him with his head down, never his hands on his hips. He just goes at it.”

As we’ve pointed out every way other than mailing a letter to your house, Mike Tomlin cares about physical conditioning above all else. And so Blakeney, and presumably the rest of the young players, were sent home with a weekly workout regimen for the next month. He calls it the toughest one he’s ever seen but again, points back to Tomlin’s ultimate goal.

“Coach Tomlin’s number one thing is to be the best physically conditioned team every time we step out on the field. He feels like that wins a lot of games.”

Four games. 14 practices. That’s the timeline Blakeney gets to prove his case. And there are several others vying for the same spot. Demarcus Ayers was drafted, Eli Rogers returns – literally and figuratively – and Shakim Phillips is a similarly sized player. It’s not a large window of opportunity but it’ll have to do. Blakeney will be ready each morning, walk down St. Vincent’s stairs to Chuck Noll Field, and make himself a tough player to cut.

Perhaps he’ll start each day with a cup of coffee. It’s a nice routine.