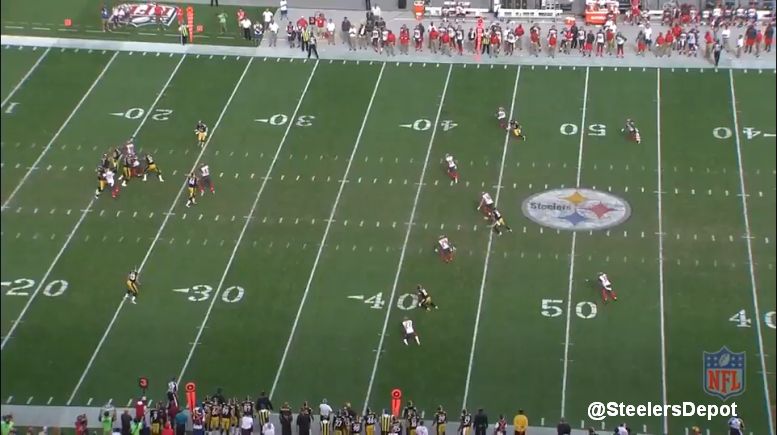 With the weapons the Pittsburgh Steelers have, there’s reason to take vertical shots. Even if it isn’t to the degree of Bruce Arians, Todd Haley’s offense is full of deep shots, even if it’s conventionally thought of as a horizontal attack.

There’s a second element of what a vertical attack can do. Obviously, there’s the ability to complete the deep ball. But there’s also the ability to create space underneath for your running back, putting him in a one-on-one matchup with a linebacker. So when that running back is Le’Veon Bell, you go to that well time and time again for big plays. The secondary goal of vertical routes is the ability to expand the defense to open up the checkdown.

We’ll look at several examples from 2014 and a clip from last season, since 2015 had more limited opportunities.

The first look comes in Week One in 2014 against the Cleveland Browns. Steelers are in 11 personnel, 6 man protection, with Bell coming out of the backfield on a check/release. Three vertical concept, similar to the Y Over we covered last week, with the Browns’ in Cover 1.

The three receivers essentially clear out the underneath for Bell, leaving him one-on-one with the linebacker. He presses him one way and then plants the other, gaining a ton of separation. Check it out in the GIF.

You can see all the separation he has by the time he makes the catch. This still below shows him as he’s juking the linebacker out of his jock.  Lots of green grass behind. 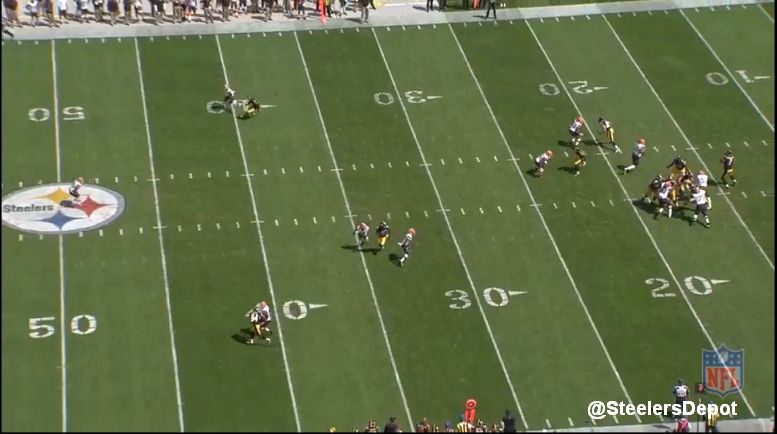 Because the Browns are in man-to-man, there’s no vision to the ball, and Bell has tons of space to work with. He winds up gaining 30.

Couple weeks later against the Tampa Bay Buccaneers. 3rd and long. It’s the same idea. Three vertical routes, all sitting down past the sticks, expanding the defense and opening up the underneath. The Bucs are in zone coverage with vision to the ball but we’re getting the ball to one of our best playmakers in space. Again, that is the whole idea. Let playmakers make plays.

And Bell does, dodging past and running through several defenders to somehow pick this first down up, which you’ll better see in the end zone GIF.

I’m not sure the intention or thought was to pick up the first when Ben Roethlisberger checked it down but when you do, you know you’re making the smart play that has the chance for a payoff just because of how talented Bell is.

A still photo of the space Bell had because of the vertical threat, forcing the Bucs to respond to it.

This next one comes on MNF against the Houston Texans. 3rd and 5. Nearly the same concept as the Browns’ play. Over concept, six man protection. Only difference is Bell runs an angle route. With linebacker Brian Cushing slightly opening his hips, Bell sharply turns his route inside, crossing his face and running through contact.

It puts the linebacker in trail and with the Texans in man coverage without vision on the ball, Bell has tons of space. 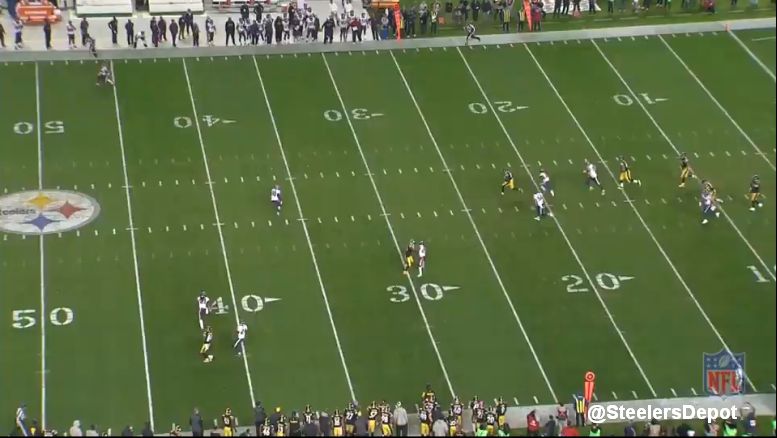 At the point he catches the ball, the only defenders near him are behind him. So it just becomes a matter of beating the safety in space. I don’t care who the safety is, I’m trusting Bell to make him miss and gain a boatload of yards.

And our last look comes from one of the few chances Bell had in 2015. We’ve examined expanding defenses vertically but we can do the same horizontally, or in this case versus the St. Louis Rams, both ways.

Out of 10 personnel, Pittsburgh’s outside receivers run vertical while the slot receivers run wheel routes, moving into the flat before bending their route down the sideline.

It literally clears out the underneath middle, leaving Bell one-on-one with the linebacker. Again, that’s a matchup you take every time. 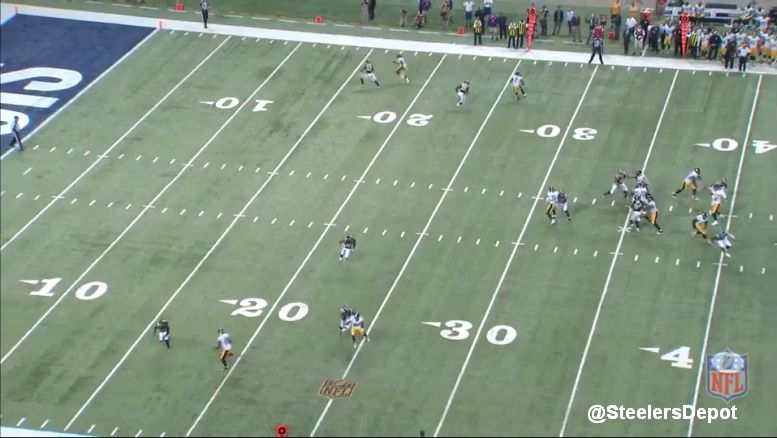 He makes the grab, makes the linebacker miss, and it’s a big gainer down to the ten.

DeAngelo Williams was able to do this to a lesser degree but doesn’t have the big-play ability or trust from Roethlisberger that Bell has created. While I’m excited to get the team’s star running back for what he brings as an actual runner, what he does as a receiver – and how the scheme helps that – has me equally geeked.