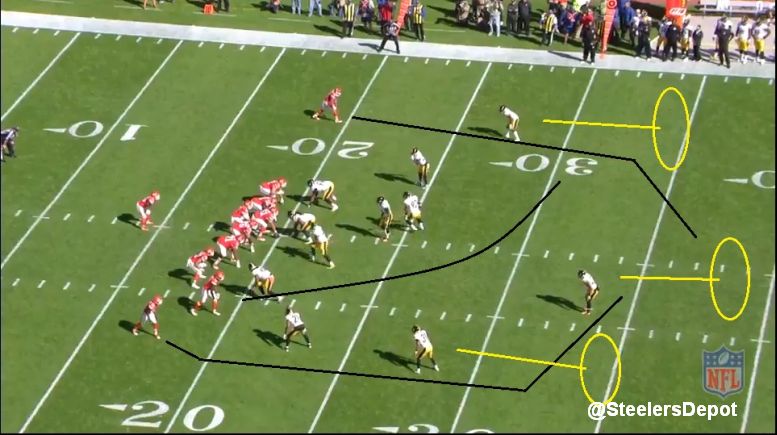 No defensive scheme is perfect. If one existed, every team would run it. So it’s the same in Pittsburgh. Perhaps the biggest problem the Steelers have to defend are multiple vertical concepts. Think the Seattle Seahawks debacle last season, their 4 vertical attack eating up the Pittsburgh.

We’re going to highlight a problem with another concept today. The Y Over concept that has spurned this unit, under Dick LeBeau and Keith Butler, so many times.

I was reminded of the concept reading a 2015 clinic session by Florida State head coach Jimbo Fisher, who talked about this play at length during the session.

At its most base form, here is how he drew it up. But to be clear, he expanded on it by showing different checks, sight adjustments, personnel and formation groupings. 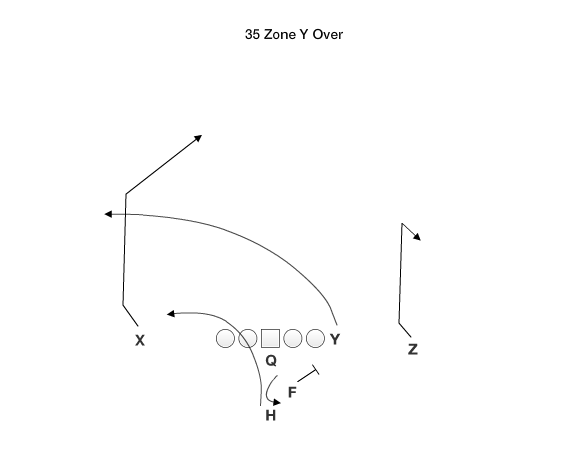 It’s an inside zone playfake. Not a full naked or boot but the QB slightly rolling and then setting up his drop. From Fisher’s notes.

To the frontside, the X receiver runs a post and is the first option if the middle of the field (MOF) is open, as you’ll get in Cover 0 or Cover 2. The Y runs the “over,” or crosser, across the field, behind the linebackers and into the boundary.

The back leaks out to the frontside as a checkdown option, staying in the QBs cone of vision as he looks to the Over route. The backside Z runs a comeback under Fisher but in different systems, I imagine he has flexibility.

This has been run against the Steelers’ Cover 3 so often and to such a high degree of success. Let’s thumb through a couple examples.

Cleveland has burned Pittsburgh on this a zillion times, especially in 2014. You know it’s bad when Jim Dray gets open for a 20 yard gain. Steelers are in Cover 3 vs the Y Over. I’ve added in the assignments by both Steelers’ corners and the single high safety, taking away their third of the field. 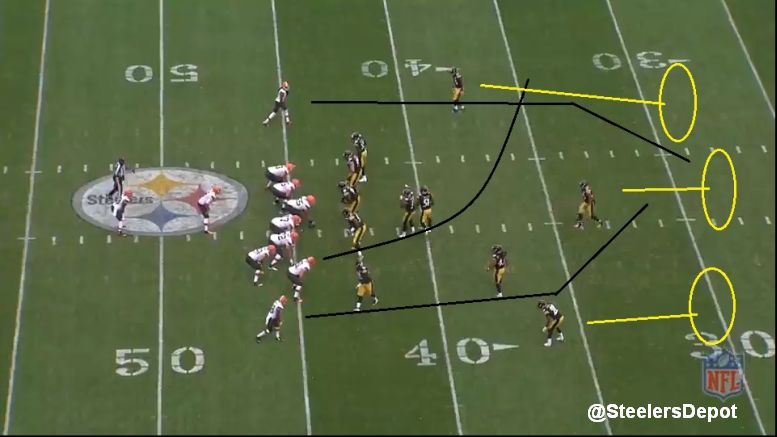 The field side corner carries #1 on the post but there’s no one to pick up the tight end coming across the middle. With the team in zone and spot dropping, plus the influence of the zone fake, the middle hook or curl flat defender never sees the receiver get behind him. It creates a soft spot in the Steelers’ zone and an easy window to throw into.

Just look at all the space Dray gets. Has nothing to do with him as a player. It’s all about the scheme. When he catches the ball, the closest defenders are 11 yards away. 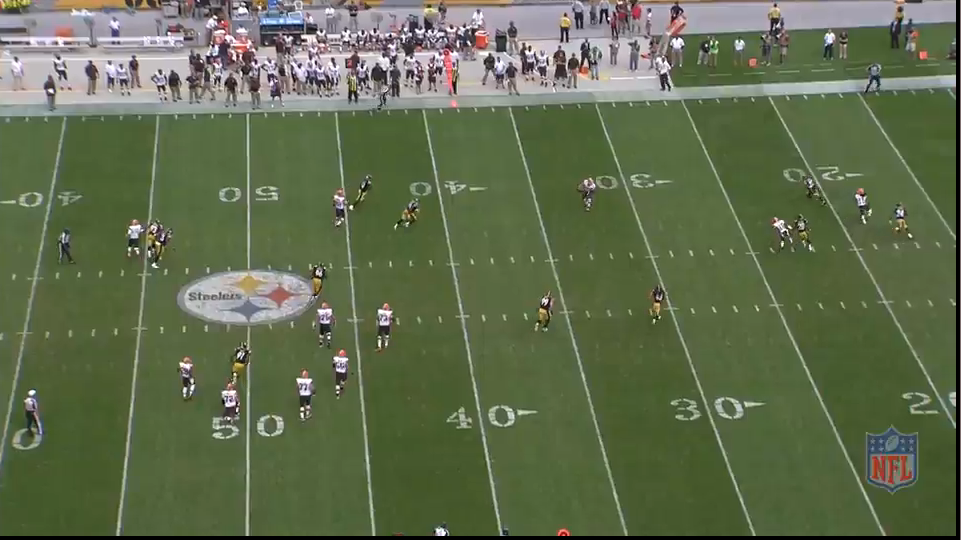 One last look at the play in GIF form.

Fast forward to Week 2 of last season. Pittsburgh is in Cover 2 but has the same problem. How do you defend multiple vertical concepts to the same general area? Four under, three over the top. They have no answer and the 49ers get a 40+ gain to Vernon Davis. 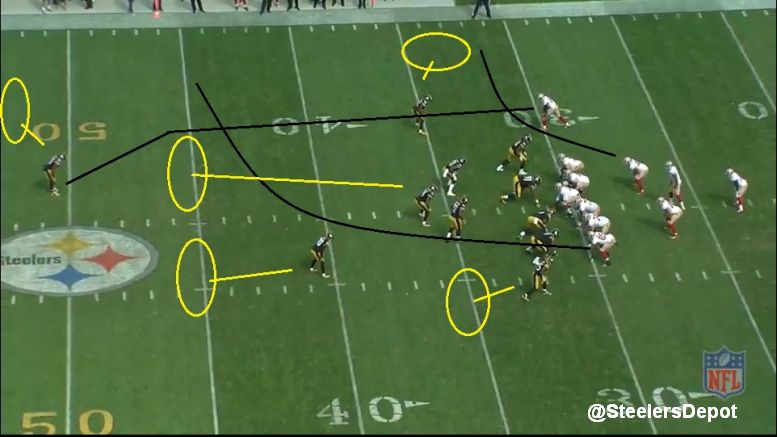 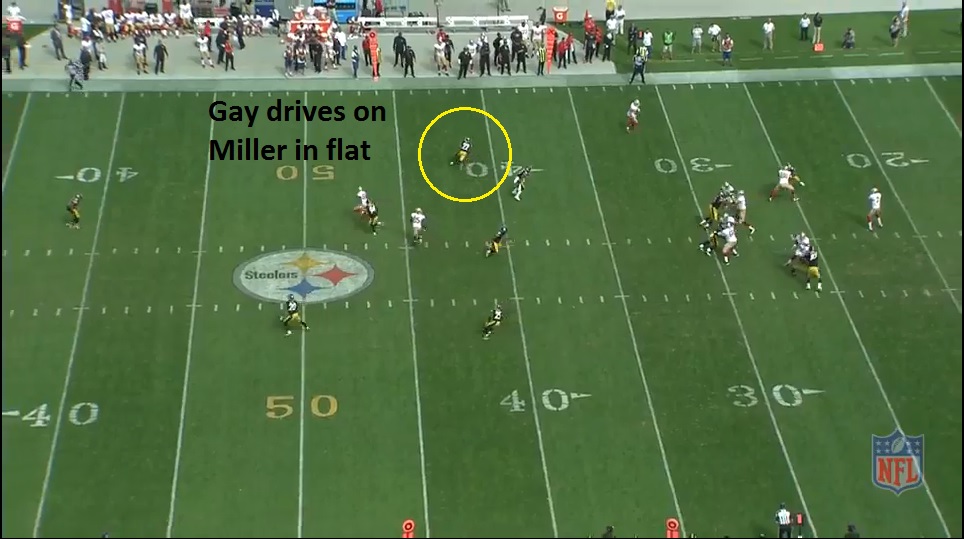 This is literally the read Fisher talks about for the quarterback to make.

“Cover-2 is the toughest coverage to run this pattern against. The post gets covered up by the safety, however the Over Route becomes a high/low read off the corer. The corner on Cover-2 rolls up, re-routes the number-1 receiver, and plays the flat. If he plays up on the back coming out of the flat, the Over is wide open behind him. At 18-22 yards, the corner has to get good position to stop that throw.”

That’s exactly what plays out here. Gay drives underneath and the Over is open.

And one last look, dressed up a little differently. Week 7 against the Kansas City Chiefs. Same idea, the post and the over coupled, but the Y stays in and the #2 receiver runs the over. The post to the boundary clears out the corner and the curl/flat defender never sees the Over concept.

Again, it’s Gay who never feels the route behind him. 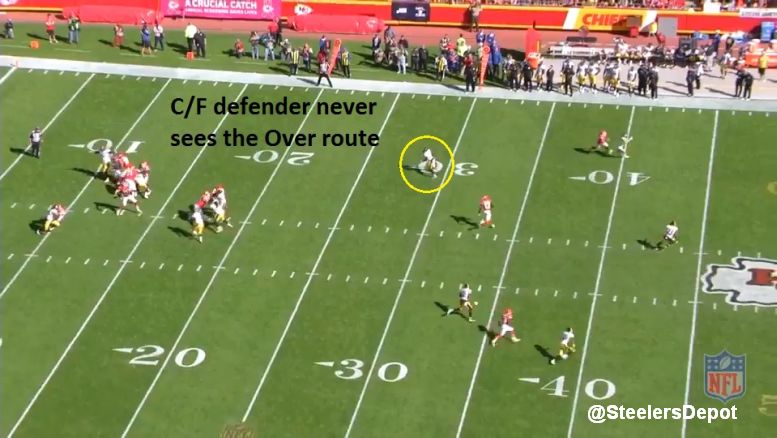 The Steelers are running a fire zone (blitz 5) with Ryan Shazier coming to because the back stays in, but it’s the same idea. Cover 3 shell and the underneath defenders being none the wiser to the crosser working behind them.

And the pass is complete for 25. Would’ve been a lot more had the receiver not had to go to the ground to make the grab.

To be fair, this is a very tough coverage to stop. In zone, you can see the issues a team like Pittsburgh has, in both their Cover 2 and Cover 3. And in man, if the defender responsible for the Over Route is a step behind (playing outside leverage or just outmatched athletically), he’s screwed. Has no chance to catch up. Fisher points to man coverage as the best look to run this against.

I really didn’t have a great suggestion as to how to stop this, to be honest. So me shooting from the hip and talking about problems without solutions isn’t very helpful. But the brilliant James Light posted one great way to stop the Over concept from working so well.

. @RaidersAnalysis Weak Side hook defender robs the Dig in Cover 3. In this case M robs the dig from the Z Receiver pic.twitter.com/jei4OWt2JP

Last year, he included a clip of “Roboting” the dig to take everything away. It’s the best defense I’ve seen.

Once Seattle ROBOT the Dig vs same 3 level, Eagles had nothing, killed drive: https://t.co/ZbytWZLSyP pic.twitter.com/UqzaHdPAlK

The bottom line is that the Over Concept has burned Pittsburgh for too long. And you can bet every team in the league knows this is a weakness. It’s difficult to do but individually, this is a tall task for Butler to correct in 2016.