Ben Roethlisberger has made a laundry list of impressive plays, impressive moments throughout his career. And we can all pick out our favorite. That’s what Steelers.com’s Bob Labriola did in his Asked and Answered column and it’s a really cool one most have never seen.

We usually don’t reference his column if only for the fact most of the questions are trivial at best or at worst, downright silly. But I absolutely loved the little story Labriola shared in response to his favorite Roethlisberger moments.

It was Ben Roethlisberger’s rookie training camp, in 2004, during a Saturday afternoon practice. In an 11-on-11 team passing drill, Roethlisberger was the No. 3 quarterback at that stage and was on the field with others of the same stature. The pass rush forced him out of the pocket – even though there is no tackling the quarterback – and broke into a sprint toward the right sideline where I was standing with Tunch Ilkin. On a dead run, Roethlisberger fired the ball back to the middle of the field, about 25 yards beyond the original line of scrimmage, and he hit a free agent receiver named Zamir Cobb right in the chest as he was crossing the field from the far sideline in a dead sprint himself. I looked at Tunch, and he looked back and said, “Brett Favre.”

In total, he’d throw for 2621 yards and 17 TDs his rookie season. He and the Steelers would fall to the New England Patriots in the AFC Championship Game, a game I do my best to forget but still burns brightly in memory.

Labiola’s story is an awesome one, a first realization of the special player the team had just drafted.

Quick story of my favorite Roethlisberger memory, of which there are hundreds. It’s an incompletion. But the most beautiful incompletion I’ve ever seen.

Steelers. Ravens. 2010. Late fourth quarter, Pittsburgh down 10-6. Troy Polamalu has just made what will turn out to be one of his most iconic plays, forcing a fumble on Joe Flacco, recovered by LaMarr Woodley. Now the offense has to close things out. First and goal for Pittsburgh and Terrell Suggs destroys Jonathan Scott around the left edge. Has Ben dead to rights. He’s pulling on Ben’s helmet, clawing at the football, but Roethlisberger drags him along – Ben running backwards – and flips the ball to the left sideline as he and Suggs crumple to the ground. He’d throw the game winning TD to Isaac Redman two plays later.

NFL.com thankfully still has the clip of it, though I’m having trouble embedding it. So click the link here.

The Cris Collinsworth “oh my” really says it all.

Quick screencap of it, summing up Roethlisberger’s career – and relationship with Suggs – in a picture. 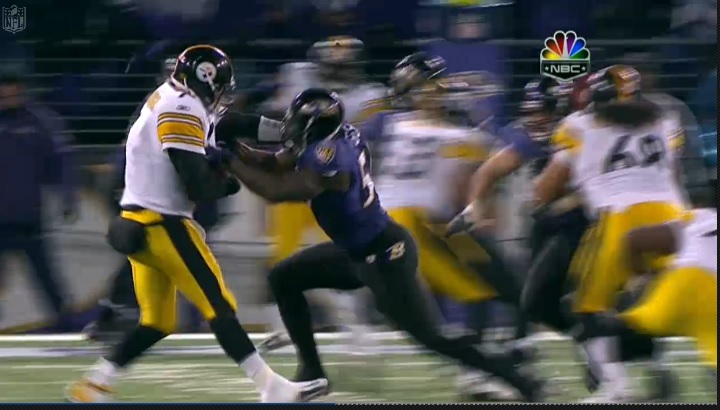 The fight, the struggle, two great players going at it on the world’s biggest stage. To me, that sums up Roethlisberger.

I’m sure I’ll try to write more beautifully about that play whenever Roethlisberger retires. Let’s just hope that isn’t for quite some time.

Anyway, let me know your favorite Big Ben moment in the comments.