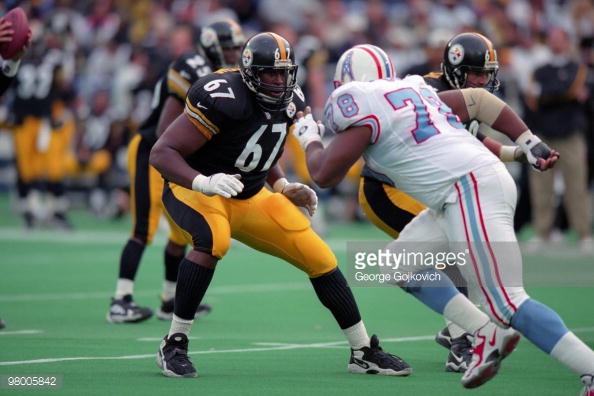 Let’s recap the top five biggest busts in franchise history. We’ll go from #5 to #1, the worst one ever.

The man who earned the college name of Señor Sack, he is most commonly associated with being the Steelers’ draft pick over Dan Marino. It’s a sad story and Rivera’s career initially showed promise, recording two sacks early in his career. But a drunk driving accident, Rivera was at fault, left him paralyzed from the chest down for the rest of his life. His career was over from the moment the accident occurred late on October 20th, 1983.

The Pittsburgh Post Gazette ran the headline on its front page the following morning.

The Steelers have had busts who saw the field and were quickly spit out by an obvious lack of ability. But Jackson barely ever saw the field in Pittsburgh, playing in nine games over two seasons before being cut at the start of the 2005 season. In Pittsburgh, he made eight tackles and never picked up a sack.

His Wikipedia bio attempted to be as optimistic as possible but resorted to this “highlight,” reeking of desperation that makes the pick actually feel that much worse.

This is one of my favorite picks because it epitomizes the dysfunction that occurred in the pre-Noll era. A well-meaning Art Rooney letting his coaches coach. But the people he’d appoint were not good at their jobs and the decision to draft Glick highlighted that.

Walt Kiesling had his heart set on him based almost solely on a letter of recommendation from Glick’s college coach. The Steelers knew nothing about him. Had no film, no information, minus the letter. And as Dan Rooney tells it, the team’s “hearts sank” once they saw his college tape – after he was drafted.

Glick wasn’t a terrible player and that’s the big reason why he isn’t higher on this list. He spent a little over three seasons with the Steelers before finishing his career with several other teams. He still holds the distinction of being the only defensive back to ever be drafted first overall. And arguably the most bizarre decision.

Stephens did get the chance to start for Pittsburgh but the results weren’t pretty. And often, they were a result of him filling in for an injury. Two games at left tackle when Will Wolford tore a muscle in his chest, the second half of the 1998 season when Justin Strzelczyk tore a quad. Stephens’ play wasn’t pretty, struggling to keep his quarterback upright.

It all came to a head in the training camp of 1999 when Bill Cowher famously cut him shorty after the tackle, reportedly overweight, failed to complete the team’s conditioning test.

Here’s an archives article from the PPG, a picture of Stephens struggling through drills with some blunt comments by Cowher on the decision to let him go. 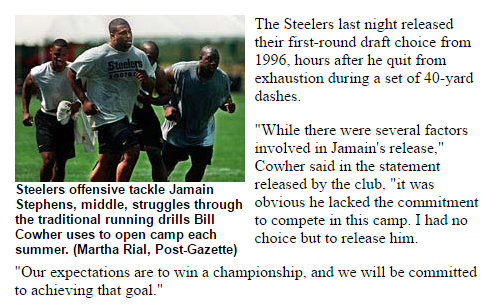 He would finish his career with the Cincinnati Bengals, starting four games over three seasons.

The Steelers had some whiffs in the 80s and 90s but none stunk more than Richardson. He’s arguably one of the least productive first round picks in NFL history. His NFL career stats seem to range from zero to two tackles, depending on your source.

After just one season with Pittsburgh, he was deemed “not one of the top 47 players” by Cowher – who didn’t draft Richardson, and had no issue shipping him to Washington for a 7th round pick. He would be cut again on October 21st, spend the rest of the season with the New York Jets, and never play in an NFL game again.

At least Richardson enjoyed a more successful post-football career. He was named VP of a sales company and did well on Wall Street. His life was also spared on 9/11; he was in the bottom floor of one of the Towers and was able to escape.