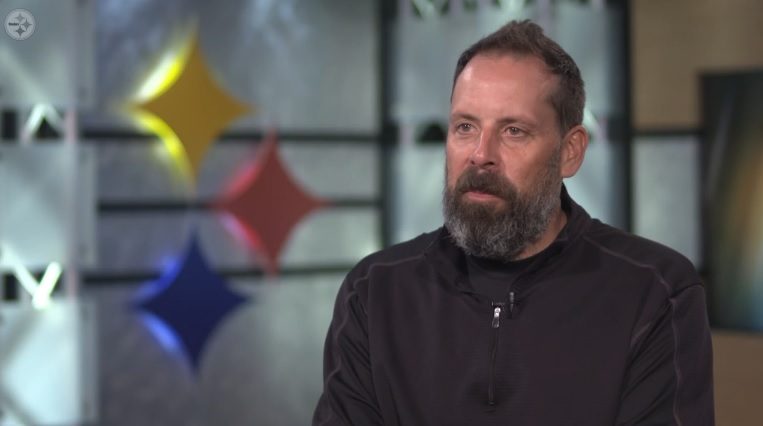 Now that’s he’s entering his fifth season with the Pittsburgh Steelers, offensive coordinator Todd Haley knows that his offense has still yet to reach its full potential. With the draft now behind him, Haley told Missi Matthews of steelers.com last week all about how he currently spends his days when it comes to making offensive improvements.

“We kind of cut our days in half where were working with our players and then us as coaching staff going all the way back to February, March and [we] have been working hard to evaluate our season, evaluate from a protection standpoint, a run standpoint, a concept from a passing standpoint,” said Haley in his interview that played on Steelers Nation Radio. “We review everything we’ve done, watch every play, we watch other teams that were maybe especially good in certain situation football areas and were not afraid to steal or copy any of those things.

“But we just try to make sure we have a good grasp of what we did first and foremost. where we can get better, especially situationally. That’s really what our game’s come down to is third downs, staying on the field, scoring points in the red area, not turning the football over, eliminating minus plays – runs and sacks – so we do a full review.”

While Haley’s offense did manage to finish in the top five of the league last season in average points per game (26.4), the team definitely can make improvements when it comes to third downs and red zone scoring. For example, on third downs last season, the Steelers 38.86% conversion rate was only good for 17th-best in the league. Additionally, the Steelers offense needs to improve more in the red zone in 2016 after converting 60.71 % of the time in 2015, which was 10th-best league-wide during the regular season.

With the Steelers now fully immersed in their OTA practices, Haley told Matthews what it is he and the rest of the coaches are trying to accomplish during these few weeks and what their overall goals are.

“You want to lay a foundation for what you’re going to be doing,” said Haley. “How we set it up, as we get to go through in our OTA installation, is basically what we’re going to install in training camp so it’s kind of a first dry run, if you will. For us as coaches, it’s a chance to tweak or exchange things that we may want to see that maybe didn’t look the way that we wanted them to. To have film to coach off of once we get to training camp.

“A lot of different levels go into it, but with that being said, this being year five for me and really a lot of us that are here, it’s a little more advanced than maybe in the beginning when it was truly teaching sessions. We have so many guys that have been around that understand the language, that understand the concepts that we’re talking about, that we’re really able to fine-tune things and really get in-depth and coaching the details.”