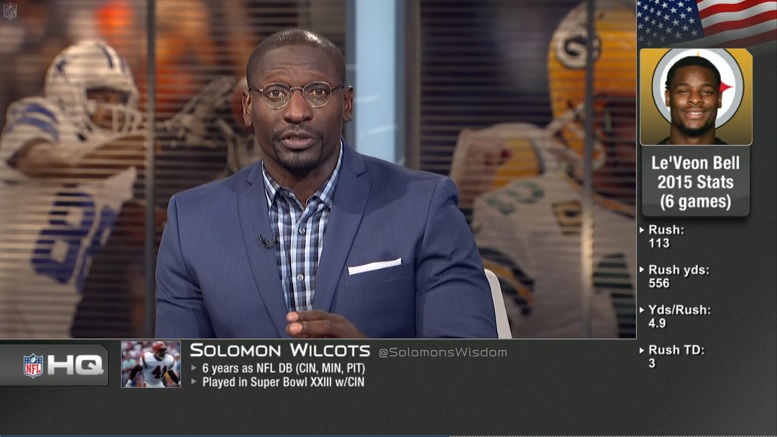 Considering the unique skill set that he possesses, Pittsburgh Steelers running back Le’Veon Bell is not only a threat out of the backfield running the football, he’s also a very big threat as a pass catcher. Because of his ability to excel in both of those areas, NFL Network analyst Solomon Wilcots believes Bell has a legitimate chance at accomplishing something in the NFL that has only been done two other times in the history of the league.

“This is a guy who can produce big-time numbers in the Pittsburgh Steelers offense,” said Wilcots. “Their offensive coordinator Todd Haley has no problem running the offense through Le’Veon Bell. I think he’s capable of becoming the first running back since Roger Craig in 1985 to have 1,000 yards rushing, 1,000 yards receiving. He’s capable, he’s got that kind of talent and they have that kind of explosive offense where he can put up those kind of numbers.”

With all due respect to Wilcots, Hall of Fame running back Marshall Faulk was actually the last player to record a 1,000 yards rushing and a 1,000 yards receiving in a single season as he accomplished that feat in 1999 as a member of the St. Louis Rams. Roger Craig became the first player in NFL history to run and receive for at least 1,000 yards in the same season in 1985 with the San Francisco 49ers.

Of course, in order to accomplish such a feat in 2016, Bell would undoubtedly need to stay healthy for the entire season and that’s something he’s had a hard time doing since being drafted in the second round of the 2013 NFL Draft out of Michigan State. Wilcots made sure to point that out.

“Now, over the last two years, staying healthy has really been the problem where he was knocked out of the 2014 season with a knee injury and then the same at the end of the 2015 season as well against the Cincinnati Bengals,” Wilcots said. “So, if he stays healthy, Le’Veon Bell is capable of putting up huge numbers, at least 1500 yards from scrimmage or even more.”

1,000 yards on the ground in 2016 should come very easy for Bell. In fact, he should be able to make a run at the Steelers single-season rushing yard record this season that is currently held by Barry Foster (1,690). Hitting the 1,000 yard receiving yard mark in 2016 figures to be tough for Bell, but even so, he’s already managed to register 854 yards receiving in a single-season two years ago. That required him catching 83 passes in 2014, so one would think he’d need to catch right around 90 passes in 2016 in order to hit 1,000 yards receiving.

While Bell might have a tough time becoming the league’s third 1000/1000 player, his chances of becoming the league’s new single-season yards from scrimmage leader is perhaps even better. That record is currently held by Chris Johnson, who totaled 2,509 yards from scrimmage during the 2009 season with the Tennessee Titans. Bell could probably easily average 157 total yards a game in 2016 if given the opportunity and assuming he stays healthy.