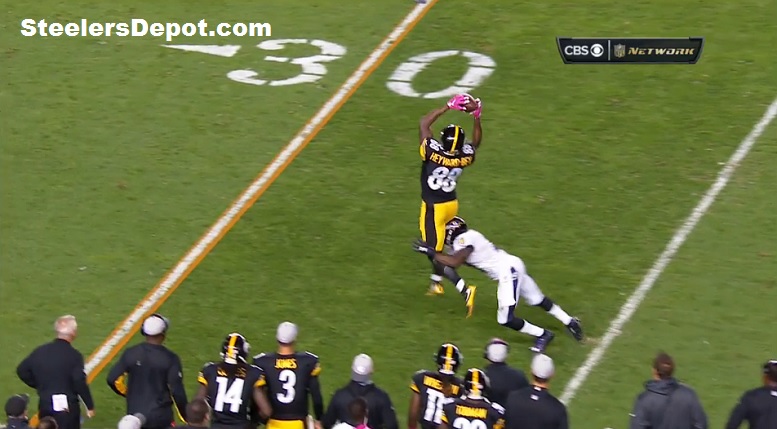 It’s been a good year overall for veteran wide receiver Darrius Heyward-Bey, which is not often something that can be said for a former first-round bust entering his eighth season. Not only did he manage to stay on a roster—which was indeed far from a guarantee—he actually made contributions, and earned himself a bigger role.

Heyward-Bey originally came to the Steelers on a qualifying contract in 2014 after flaming out with the Colts, getting benched late in the season after the team tired of his drops. He didn’t contribute much on offense, but he carved out a role for himself on special teams on the kick and punt coverage units and as a blocker on offense.

He showed well enough for himself that year that he earned himself another one-year contract, and with Martavis Bryant suspended early in the season, early playing time, which he translated to 21 receptions for 314 yards and two touchdowns over the course of the season.

Not only that, he continued to expand his special teams repertoire, becoming one of the team’s fixtures as a gunner on punt coverage later in the season. On offense, there was even a package where he was featured in a blocking role on running plays.

With Bryant’s year-long suspension looming, the Steelers spent the eve of the new league year signing Heyward-Bey to a new three-year contract, offering him the first sense of stability that he has had since the early portions of his rookie contract with the Raiders.

What’s more is that the Steelers didn’t really spend much time addressing the wide receiver position this offseason, banking on developing what they already have in-house for the most part, in particular anticipating a significant leap from second-year wide receiver Sammie Coates.

Heyward-Bey figures to compete with Coates for playing time, at least at the outset of the season, as they adjust to being without Bryant. While Heyward-Bey can line up at any wide receiver position, he would likely line up outside.

Having him as part of the team dynamic does help to keep some of the structure of the offense that Bryant brings to the table. Like Bryant, Heyward-Bey is also tall at 6’2”, and at age 29 still has exceptional speed that once recorded among the best times ever at the Combine, and that translated into four plays of at least 40 yards last year in limited playing time.

It may have taken him years, but the veteran seems to finally have found the sort of role that he belongs in and best suits him in the league. He has also developed into a bit of an on-field coach for the younger receivers, making himself invaluable to the Steelers, so it is safe to say that his stock has indeed gone up, and the drafting of Demarcus Ayers does not affect his position at all. At least for the time being.