Don’t ask me who will be the 25th overall pick. Good luck getting a straight answer from anyone. I’ll have my final mock draft on Monday with my best guess but yours is as good as mine.

But if the pre-draft visits are any indication, we have a general sense of where this team’s head is at. Now that we know all 30 pre-draft visitors, let’s do a short breakdown. If you missed it, here is the list. 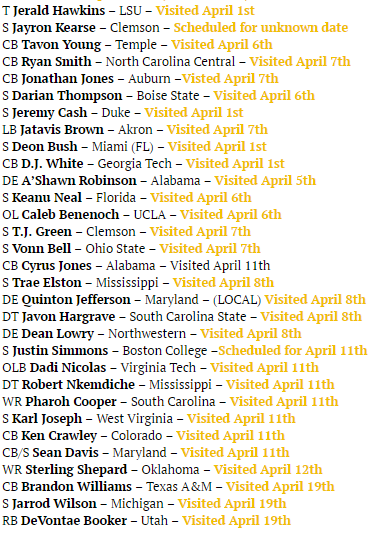 19 of those 30, excluding Quinton Jefferson since he counted as local, were defensive backs. 12 safeties, seven corners, if we count Sean Davis as a safety.

The rest of the group includes:

Last year, the Steelers had official visits with seven outside linebackers and Pro Day dinners with five others, including eventual draft pick Bud Dupree. If that trend continues, it would make sense safety Karl Joseph is the team’s target at 25, given the abundance of safeties brought in.

What is quite different from this year compared to others are the seemingly lack of first round picks brought in for a visit. Only A’Shawn Robinson feels like a slam dunk in the first, and he has many detractors, while Joseph and Robert Nkemdiche are the only two that feel reasonable, though those two have great reasons against. Even expanding it to fringe first and early second round picks, we can really only tack on Keanu Neal, giving us four in total. I do, however, understand the interest in Andrew Billings and William Jackson III, even if they are not official visits.

Last year, Pittsburgh had five and Randy Gregory, a top talent who slipped due to drug concerns. In 2014, there were ten first rounders alone. Now, there is some ebb and flow to this, the 2013 batch didn’t have many top names either, so maybe this is much ado about nothing. But an interesting aside.

If you’re looking to keep your mocks in the realm of what is likely to happen, include three pre-draft visitors in your first four rounds. A 75% clip is about the figure while with the last three picks, use only one pre-draft visitor, and you’ll about fall in line with the average.