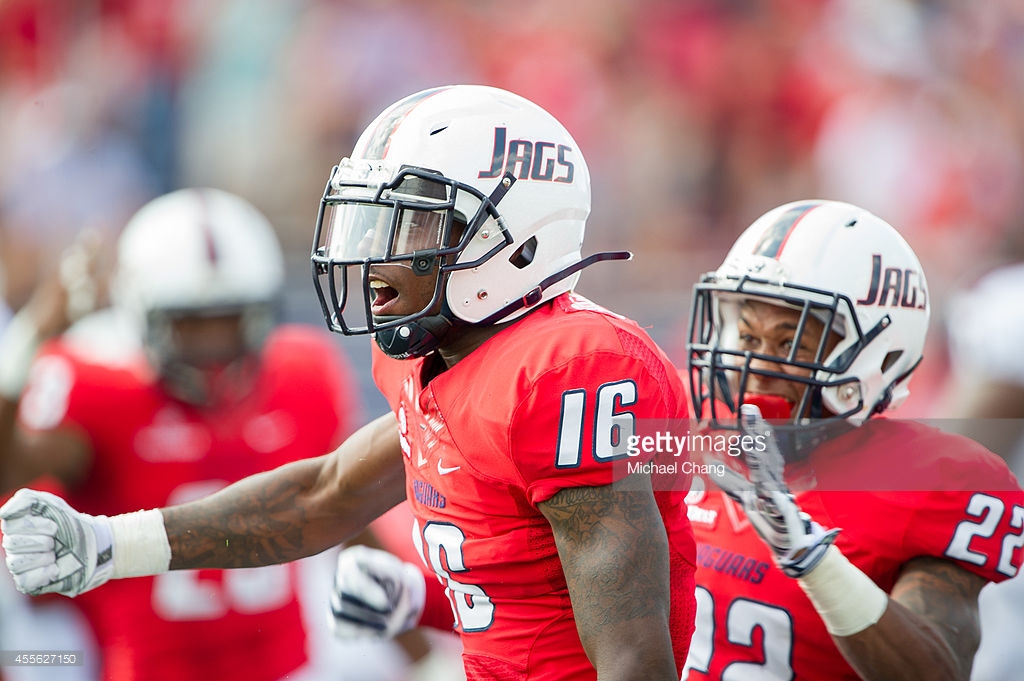 I don’t know if it’s intentional or not by Pittsburgh, or maybe Daylight Savings Time is throwing my perception off, but Garner has taken a similar overall career arc as many of the future players we’ve covered. A strong talent out of high school, regarded with size and blazing speed, who dealt with academic issues that forced him to turn down Division One offers and attend a Junior College.

Despite playing just two seasons of high school football, he earned looks from TCU, Baylor, and Colorado State. So it was a big step down when he had to join Texas’ Navarro Junior College for two years. He did well in his time there, despite an injury limiting him to five games in 2012, and combined for four interceptions on a successful squad over that span.

Garner made the decision to join South Alabama and the timing couldn’t have been more perfect. The school was one year into playing at the FBS level, getting their butt kicked in their debut season, winning just once against an FBS team. The Jaguars’ defense allowed at least 30 points in eight of 13 games. Adding Garner was a large step in trying to fix those woes.

In 2013, the defense – and the team – took a Neil Armstrong-sized leap, going 6-6 and nearly completing a comeback against Tennessee, a game in which Garner recorded an interception. It’s those splash plays against center stage opponents that gets NFL scouts to notice you.

The football family he comes from helped too; his dad played at Kansas in the 1980s while his mother ran track at Kansas State.

As a junior, Garner led his squad with three interceptions and followed that up with another pair in 2014. Maybe Saturday’s were easy comparatively after facing quarterback Brandon Bridge and tight end Wes Saxton in practice each week, both of whom were invited to the 2014 Combine.

The answer to his 40 time depends on who you source. His NFL Draft Scout bio lists him at 4.61, but this Laginappe Weekly article puts him down at a 4.5, a world away from 4.61. No matter how you slice it, Garner’s speed should be regarded as good enough to make in the league.

The then St. Louis Rams scooped him up as a UDFA and like so many others in this series, made it to the end of the preseaosn before getting a pink slip at final cuts. He was in camp with safety Jacob Hagen, also signing a futures deal with Pittsburgh, but it was Hagen who earned a call-back to the Rams’ practice squad, not Garner. As far as the Internet tells me, Garner was on the street for the rest of the season.

The AFL’s Orlando Predators intended to have him for the offseason, signing him in late January, but a week later, the Steelers stole him away. The Predators took the move in stride, with their head coach saying the following in a statement.

“We knew Montell was an outstanding talent when we brought him aboard, so it comes as no surprise to see him earn an opportunity in the NFL.”

With the established talent and jumble of futures contracts, Isaiah Frey, Al-Hajj Shabazz, finding a solid footing of playing time could be difficult. Someone may be the odd man out. Remember Lew Toler, a one-man fan favorite around these parts? Someone has to avoid being him; the runt of the litter, fighting for the table scrap snaps.

It’s difficult to compare these cornerbacks. Background information doesn’t tell you enough and I won’t pretend like I’ve been watching Montell Garner from the first day he stepped onto campus.

Someone will have to get noticed early in camp. A big play. Or even smaller than that; taking information in quickly, not repeating drills, not making the mental mistakes in special teams portions, even though their minds have been so trained on defense. Maybe that man is Garner. Maybe it isn’t. That’s the beauty of training camp.

Like Forrest Gump proclaimed, you never know what you’re gonna get.