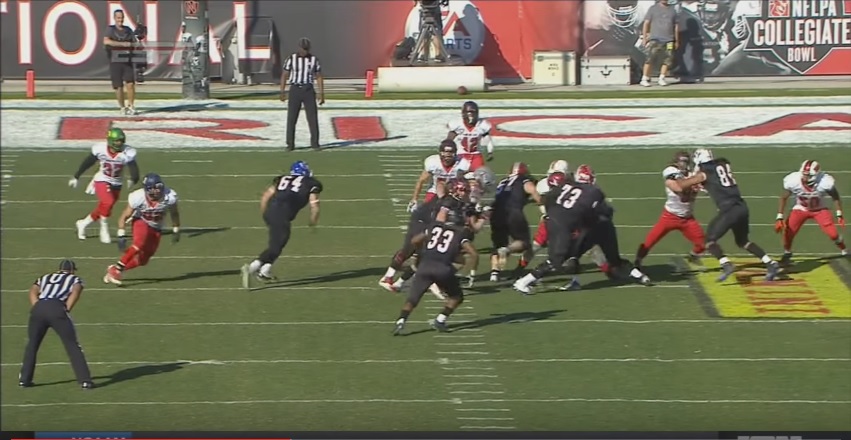 Manhart is the most recent add to the list of Steelers’ futures contracts. And frankly, there isn’t a ton of information available out him. He attended this tiny Division II school, choosing to take a scholarship there than preferred walk-on offers to Colorado State and Kansas State.

He wound up starting three years at left tackle, having a high degree of success, and named an All-American his junior and senior seasons. An invite to the NFLPA game helped put him on the map and he put up respectable numbers at his Pro Day, going to Nebraska’s facility , a common occurrence for small-school players whose individuals schools don’t host one. That included 28 reps on the bench press.

Still, it wasn’t enough to get drafted, and he was picked up the Philadelphia Eagles as a UDFA, thought highly enough to be awarded a substantial $15,000 signing bonus. Though any player getting a shot in the NFL is going to be excited and say all the right things, Manhart seemed to genuinely hope the Eagles would be the place to call home.

“Philadelphia had been on the top of my list this whole time. I had gone on a visit there and they came to visit me at my house,” he told the Kearney-Hub shortly after signing.

Only three Lopers have ever appeared in an NFL game since 1960. Two recent names, DE Mason Brodine and OG Stephen Goodwin, both getting the briefest looks in the league. Only Randy Rasmussen had staying power, a longtime left guard of the New York Jets beginning in 1967 through 1981.

Fun fact: there are two people to ever play football in the NFL named Randy Rasmussen. Both were left guards. The second one a starter for the Steelers. And they aren’t related. Go figure.

In his first taste of how cruel the NFL can be, his dreams of playing in Philadelphia were dashed a month into his career, waived in June. He would bounce around, signed by the New Orleans Saints, only to be released four days later. Oakland was his last stop, picked up on the practice squad as a late-season addition.

It was the Eagles who decided to kick him inside to guard, though the move was anticipated, and Manhart trained before the draft as an interior player. The Steelers announced him as a guard and appear to intend to do the same, though having that tackle background is always valuable. Chris Hubbard went down a similar road, converting from tackle to guard in the NFL before due to circumstance, seeing action as tackle last year with Pittsburgh.

The Steelers’ interior depth is just average at best and assuming Doug Legursky is not re-signed, makes it even thinner. Cody Wallace will kickback to being a backup and the team is high on B.J. Finney so like any player in Manhart’s situation, he’s still very much on the outside looking in. But if he can show what made him so good in college, a big leap, I know, there could be a home on the practice squad. You know the Steelers are always keeping two or three of those big uglies.