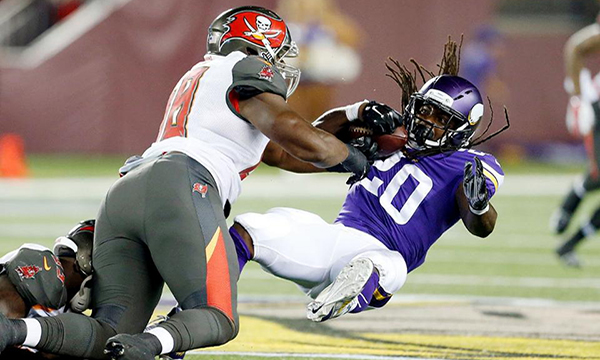 After writing yesterday about Pittsburgh Steelers 2015 NFL Draft fourth-round cornerback Doran Grant and how his perception has wavered back and forth since his initial release the day after the team settled on an initial 53-man roster, I was reminded of the reason that he was released in the first place—or one of the reasons anyway.

Of course, the fact that the Steelers added Ross Cockrell to the mix was a major, major factor into that decision. Keeping both Cockrell and Grant gave them six cornerbacks on the roster and 11 defensive backs in total. Grant would have been only the fifth cornerback without that move having been made.

But remember that both he and Anthony Chickillo did in fact make the initial 53-man roster. They were both released—and later re-signed to the practice squad after clearing waivers—because the Steelers added two more players to the 53-man roster.

One of those players was obvious, the other not so much. The more obvious was running back Jordan Todman. With the Steelers’ running backs getting beat up in the preseason and Le’Veon Bell set to face a suspension, they wanted depth for the season opener, and they had just seen Todman with the Panthers. He didn’t make the 53-man roster for them, however, so Pittsburgh signed him.

But the other one? Remember Caushaud Lyons? You shouldn’t, at least by anything other than name, because nobody reading this has seen him in a Steelers uniform before. Lyons was a rookie undrafted free agent defensive end signed by the Buccaneers.

Lyons played fairly well for the Buccaneers during the preseason, in brief work compiling four tackles and a sacks. But the Buccaneers had enough depth—and added Steelers release Howard Jones instead, ironically, whom Pittsburgh intended to sign to their practice squad—that they let him go.

Why the team felt it necessary to claim him outright, and then to keep him on the 53-man roster for the first three games—he was then released to promote Chickillo, and then signed to the practice squad himself, flipping spots—I don’t fully understand.

The Steelers already had meaningless depth players along the defensive line, including rookie sixth-rounder L.T. Walton, who only saw a couple dozen snaps his rookie year. Lyons as a seventh defensive lineman who would be a guaranteed inactive didn’t make much sense. And the irony is that Daniel McCullers had already been injured at that point, so you would think then that they might want the depth when he was released.

But the fact that the Steelers chose to add him at all to the 53-man roster, and then keep him all year over Ethan Hemer, an end who had been in the system for two years but was released from the practice squad the day after Lyons was claimed, has to say something about the potential that they saw in him for John Mitchell to shape.

With prototypical 3-4 defensive end size at 6’5” and 284 pounds with athleticism and speed for his position, according to his pre-draft scouting report, I will be intrigued to hear the first reports later this year about how he looks in the black and gold. If it ever amounts to anything will be determined at a later date.