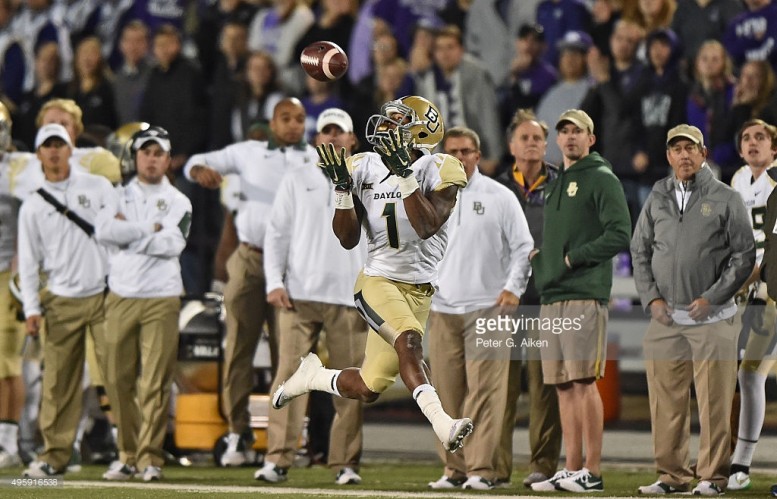 Welcome back to Day Two of the NFL Combine. Today is jam packed with the rest of the offense with the quarterbacks, receivers, and tight ends all working out. So many notable players so let’s jump to what I’m looking for.

– On a broad level, you’re just looking for a sense of confidence with this group. Comfort? Look elsewhere. National stage, new environment, new group of receivers. Get used to it. The NFL isn’t a comfortable job. Throw the seven route where it’s supposed to go. Be smooth in your drops, show me you’re working on getting away from under center. Recover from a bad throw. Have your first pass be as solid as your last. It’s easier than it sounds given the circumstances, but do that, and teams aren’t going to care that the receiver broke at the wrong depth.

– These quarterbacks are throwing on air so in a sense, it’s hard to really take away too much from their performance. But I want to see positive days out of Christian Hackenberg and Connor Cook. They’re dying for good press and have the physical makeup to give them every chance to succeed. If they struggle, the criticism is only going to mount.

– Has Kevin Hogan done anything to modify his horrid throwing motion? Fixing things in just a few weeks is asking a lot but I’ll be curious if he’s made any tweaks.

– Cody Kessler has been slapped the “game manager” tag. I want to see this guy rip it. Hit the flag route on the money. Toss the go into the bucket. Show me an arm. Because if you don’t do it here, you’re sure as heck not doing it when the bullets are live.

– Vernon Adams is undersized but I think he’ll impress with his arm and ability to throw on the move. Works well even when he doesn’t have a solid base under him. Some guys really like him. Others are writing him off because he’s not even 5’11.

– I want to see Pittsburgh WR Tyler Boyd be fast. Come out and wow us with a 40 time. That was one of the negatives our Josh Carney had in his report. See if he can prove people wrong.

– Ditto with Aaron Burbridge out of Michigan State. Some people really like this kid, and I need to really comb through my notes, but I’m not sure if I see a real defining trait with him or a stellar athlete.

– Want to see Corey Coleman and Josh Doctson be crisp in their cuts. They played in offenses where they didn’t need to be precise or go hard all the time. Be detail-oriented. It’s easy to slow up or round things off when you’re on air (no defensive back) but act like it’s the Super Bowl. For your pro life, this is the biggest event of your career. Drop your hips and explode off your outside foot. Show us you can do it.

– Will Fuller is knocked for his tiny, 8 1/4 inch hands. Gauntlet is a great drill to show how good your hands and coordination is. If he’s clean through there, and the rest of the day, he’ll inspire extra confidence and quell concerns.

– Colorado State’s Rashard Higgins, Hollywood Higgins as they call him, is a name I keep hearing as a sleeper. I’m really amped to see him perform because I haven’t even put on the tape. See if he lives up to the undergroun hype.

– Could TCU’s Kolby Listenbee break Chris Johnson’s 40 yard dash record? Probably not but he and CB Artie Burns probably have the best chance of setting the best 40 time this year. Listenbee ran track and the dude can flat out fly. If you’re into that, and I know you are, keep your eyes glued to the TV when he comes up. Don’t block; you’ll miss him.

– Want to see what sort of improvement Braxton Miller has made since the Senior Bowl. Part of his issue was his release, getting off the line quicker with less movement, and that won’t be something we can judge at Indy. But want to continue to see explosion at the top of his route and less steps when he breaks down.

– Chris Moore has that “more quick than fast” tag. And while he isn’t going to run a 4.35, something in the 4.4’s would be encouraging. Hoping to see his impressive body control and ability to track the football. It’s one of his best traits.

– Thought Charone Peake was super stiff and rounded on his cuts at the Senior Bowl, but I recognize many like him and he does produce explosive plays. Big day for the former Clemson Tiger.

– Sterling Shepard’s shuttle drills should be obnoxiously good. Pay close attention to those. He may be tiny but he’s an excellent run blocker and tied for the group lead with 20 reps on the bench press. That was more than six offensive linemen. Zoinks.

– D’haquille Robinson has to be perfect from here on out. Kicked out of Auburn, he’s got serious character concerns and many thought he didn’t even deserve an invite. He better show up. Biggest day of his life.

– Jerrell Adams came on strong at the end of Senior Bowl week with soft hands and a better burst than expected. Hoping he carried that over into Indianapolis. If he does, he’ll be a popular mid-round tight end.

– Hunter Henry can really solidify that TE1 spot with an impressive showing. There are definitely people who really like Tyler Higbee and Austin Hooper. Too bad Higbee isn’t working out. It’s just another piece of information scouts will lack when it comes time to evaluate him. Limited body of work, just a one season started that was cut short due to the knee injury that’s holding him out. Missed Senior Bowl, too.

– David Morgan is definitely known for his size (262 pounds), strength (29 reps on bench press), and blocking. But he did also catch 45 passes and found the end zone five times this season and I want him to open up eyes and show he’s more than just a blocker.

– Bryce Williams showed soft hands on tape but melted down in Mobile and started dropping everything. Need to see clean catches away from his frame today. Don’t want two drop-filled performances on big stages to be your lasting impressions on scouts. I’ve already written that I have serious concerns about his prospects going forward so he needs to have a nice day.

– I don’t know a ton about his game but Florida’s Jake McGee could definitely stand to time and test well. Injured on the first day of practice at the Senior Bowl and though he was able to stick around to meet with teams and be in the environment, it was a setback to not be able to perform.