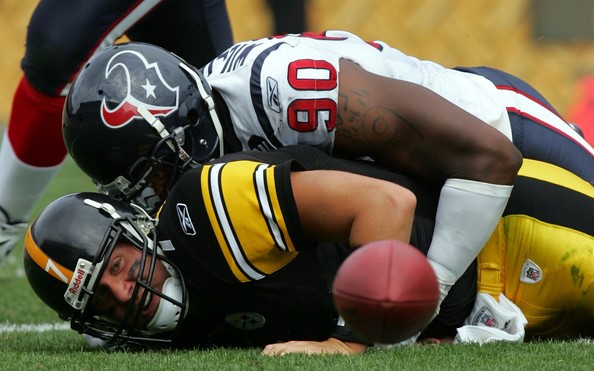 Every move the Pittsburgh Steelers QB makes this week is being examined under a microscope, as we all search for signs that Ben Roethlisberger will be able to play in the Divisional round of the playoffs against the Denver Broncos.  Sure, it’s possible that Landry Jones could surprise us all and lead the team to a win…OK, sorry, even I didn’t believe that as I typed it.  We need Big Ben under center if the Steelers want to pull off an upset at Mile High stadium.

But will Roethlisberger be up to the challenge?  We have all heard him say that he couldn’t throw more than 10 yards in the final game-winning drive against the Bengals after sustaining an AC sprain in his throwing shoulder – although he did sail a pass over Antonio Brown’s head, who was just over 22 yards downfield at the time.  The Broncos have a ridiculously talented defense, ranked #1 in the league overall and against the pass and #3 against the run.  So if the Steelers want to pull off an upset and move on to the AFC Championship, Ben needs to do more than just dink and dunk football (although he may need to do a lot of that anyway).

Roethlisberger has a history of fighting through injuries.  He is practically a phoenix this season, rising up to fight again each time he is carted off the field with what could be a season-ending injury.  If you want reassurance that he can pull off yet another superhuman recovery, look no further than the history books.  Because he has already done it.

As I mentioned in my last post on Ben’s shoulder injury, he suffered the same injury in the Steelers home opener in 2008 against the Texans when he was sacked by Mario Williams.  I suspect it was the second sack which caused the injury, which you can see here:

It was originally described to the media as a type 1 AC sprain to his right shoulder, which I believe is what Roethlisberger is dealing with this time as well.  I had to chuckle when Coach Tomlin got bent out of shape by someone saying that Ben had a separated shoulder back then, which is the non-medical term for the same thing.  Tomlin would be thrilled if no one ever knew anything about his players’ injuries.  And just to clarify, a sprain by definition means a torn ligament.  We don’t know how severe the tear was last time, and we don’t know this time either.  With that in mind, the injury truly seems identical, so it is completely reasonable to think that Ben will have the same good results.

Here’s how it went in 2008, and some of it should already sound strangely familiar:

I would argue that Roethlisberger looked pretty comfortable making that throw.  Nice catch by Santonio Holmes, too.

So far, Big Ben has followed the template of 2008 to the day.  This week, he did mental reps on Wednesday and handed the ball of on Thursday but didn’t throw.  I would expect him to be a full participant in practice on Friday and test his ability to throw.

If history is any indicator, he’ll be completing enough passes, short and long, to give the Steelers a chance to win.

One more historical note…the Steelers won the Superbowl that season.