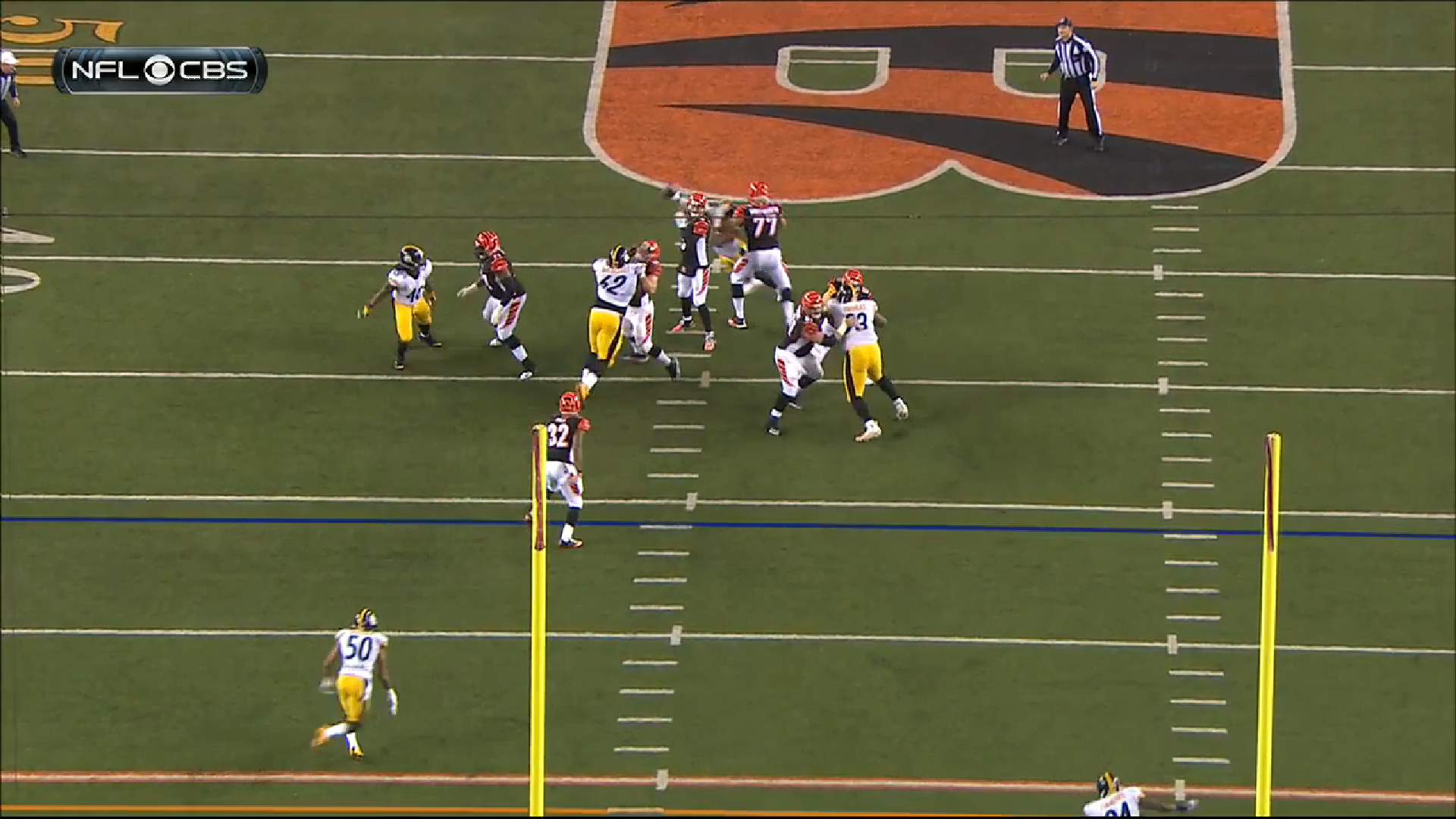 It may not have seemed like it to some, but during the Pittsburgh Steelers’ Wildcard round, Jarvis Jones and James Harrison played roughly the same amount of snaps, hovering near the 50 percent mark, and they also had roughly the same level of production, with the stat sheets for each showing four tackles and a sack, with Jones’ sack resulting in a forced fumble.

Jones was on the slightly lesser end of the snap count, logging 35 snaps, but he had an overall solid, if unspectacular game, with the only clear deficiency shown against the Bengals being an inability to cleanly execute inside stunts, which Cincinnati has, admittedly, defended well all season.

The third-year outside linebacker’s first play of note perhaps was at the end of the Bengals’ opening drive, on a third-and-11 play following a false start that Jones helped draw from the left tackle. On the ensuing play, he was able to gain penetration against Andrew Whitworth, in so doing forcing AJ McCarron to flush out of the pocket, where he was able to find his tight end. Jones pursued the play and ended up sharing on the tackle short of the first-down marker.

Later in the quarter, on a second and long, the Steelers tried to run a stunt with Jones cutting inside into the A gap, but center Russell Bodine was there waiting and gave him a strong pop. The guard finished the job of driving him into the turf. Really, it’s a play that looks much worse than it was. You never want to be on your back, but you can’t always have your eyes everywhere, and everyone gets put on the ground occasionally.

Of course, his big play of the game—and the biggest play of his career to this point—was his sack early in the third quarter that produced a fumble that the Steelers recovered, which ended a potentially threatening Bengals drive to start the second half.

Off the snap, Jones set up his outside move by hesitating before quickly dipping his inside shoulder, able to get some bend to turn the corner, and showing some strength by working through Whitworth’s continued efforts all the way to the center of the pocket, where he was able to bat the ball out of McCarron’s hand for the sack.

In the fourth quarter, however, after hustling to make a downfield tackle, Jones tried to come inside again on the next play, and Bodine caught him again, popping him and getting him off balance before the guard put him on the ground a second time. In fairness, it didn’t seem as though everybody was on the same page on that stunt, which could have contributed to its failure.

Two plays later, Jones put forth another strong rush against Whitworth, showing speed to power and working his way into the pocket, which forced McCarron to scramble. He followed it up on the next snap by getting pressure again, displaying adaptability after his initial outside rush failed, turning to the bull rush to work inside.

McCarron still got that throw off, though it was a bit high, for what could have been a downfield completion, but overall, I think Jones had a pretty solid day as a perimeter pass rusher, even if Whitworth may have been somewhat off his game.