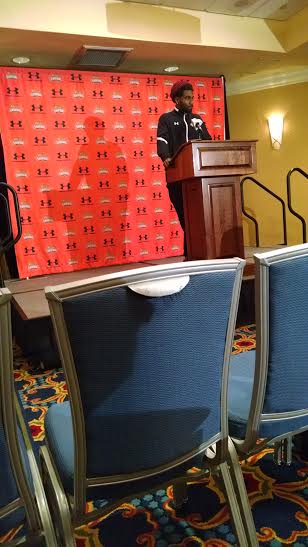 Braxton Miller’s path to the NFL is unique. So is his personality. When he took the podium after practice today, he controlled the room. A laid back personality who isn’t afraid to crack some jokes. Nothing seems to bother him and he’ll answer each question as directly as you’d expect. In a word, he’s genuine. He also has a chance to be a heck of a receiver.

I’m going to skip the prose and leaves just the good info. Some of the things he said in his talk with the media.

He said he wants to show scouts he can play as an outside receiver. And he certainly has the size to be that guy at over 6’1, 204 pounds. He came in at that after being at 215 before this season began. Said before the season started, he strained both of his hamstrings, partially attributed to the weight he was at.

Got his weight down and says he is playing with a lot more energy now.

The secret to cutting his weight? Changing his diet. Which means no more burgers and fries. Says it’s the food he misses the most.

He’s far from the only Buckeye here so naturally he was asked about current or past teammates. Miller was effusive in his praise of Noah Spence. For turning his life around after being dismissed from Ohio State. Said he never lost faith in him. “He’s like my little brother.”

Not only was he asked about players, he was asked about ex-coaches. Praised his former offensive coordinator Tom Herman.

Gave him credit for working with J.T. Barrett, Cardale Jones, and himself.

Onto the important matters from this week. When asked who gave him trouble today, he quipped about Eric Murray. Joked and asked him how many flags Murray racked up this year, calling Murray aggressive. Also gave props to Maurice Canady out of Virginia. Coaches said he needs to work on doing less in his release. Just use his speed to win. Miller says he’s catching on.

Though he’s gotta be a little worn out, Miller was immediate in pointing out he wasn’t tired. Said how much he loved the game and how blessed he was. He did mention the fact he’s playing special teams, including returning punts, is one of the biggest differences in practice from Ohio State to now.

Even with the Senior Bowl still ongoing, Miller is setting his goals big for Indy. He confirmed, without a moment of hesitation, that he’s going to run at the Combine and is setting his goal at a 4.28 40. Believes he will definitely at least run in the 4.3’s.