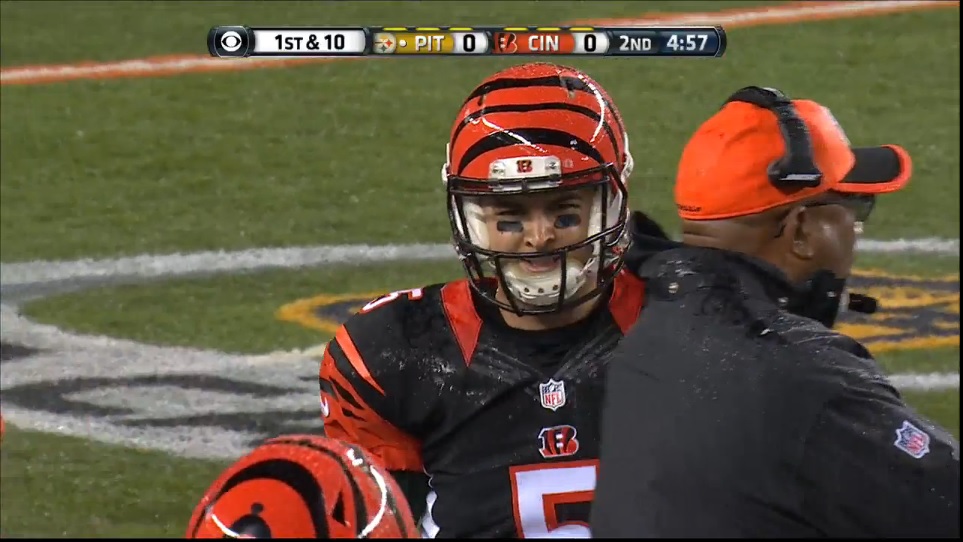 Although A.J. McCarron was relatively graceful in his press conference following the Cincinnatti Bengals loss – it’s easy to look like that compared to Adam Jones and Vontaze Burfict – the Bengals’ quarterback expressed frustration over the weather, a rainy, dreary game.

“It seems every time we got the ball it was pouring rain and it wasn’t when they had it,” McCarron told the media after Saturday’s 18-16 loss, in a transcript recorded by Steelers.com.

The rain progressed as the game wore on and after a lame duck interception picked off by Antwon Blake, likely impacted by the weather conditions, McCarron used gloves for the rest of the game. He would tell reporters after the game he felt more comfortable with them on, and it’s a surprise he didn’t wear them as soon as the rain began to fall.

We bring this up to compare McCarron’s comments – and play – with our previous study on Ben Roethlisberger’s excellent track record in poor weather conditions. As Dave Bryan wrote earlier this week, Roethlisberger is 16-4 all-time in the rain and snow with a 91.7 quarterback rating.  He finished yesterday 18/31 for 229 yards and a touchdown, finishing with a right-in-line 92.0 rating. And of course, got the win, moving him to 17-4 all-time.

While McCarron was hopefully being a little hyperbolic with the “it didn’t rain when they had the ball” implication, he seemed genuinely upset over the fact the referees weren’t drying off the football.

“Yeah, the ball was soaking wet. (Russell) Bodine was even telling me that he was having trouble with the snaps. I thought they’d at least put a towel over it or something, but there was nothing done. I didn’t know it was done that way, but every time we got the ball it was soaking wet.”

Like Mike Tomlin says, there’s no use crying over spilled milk. Or wet footballs. Both teams had to play the hand they were dealt. The Steelers went all-in. And the Bengals folded.