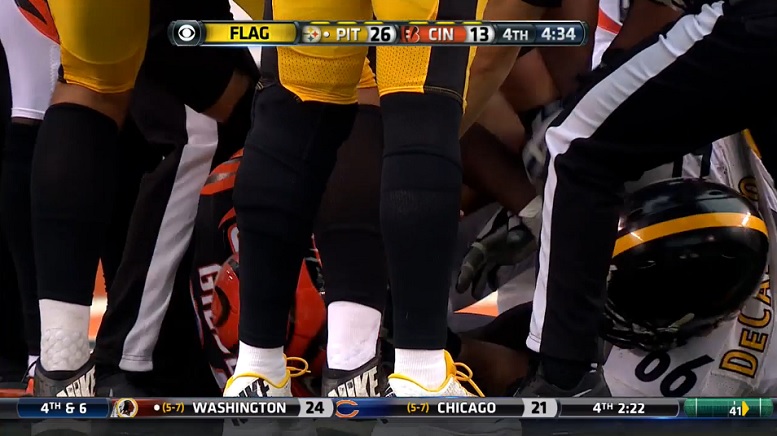 There are still quite a few unsavory details as to what happened on the field Saturday night between the Pittsburgh Steelers and Cincinnati Bengals in the AFC Wild Card game and a lot of then have to do with linebacker Vontaze Burfict.

In a Monday morning interview on 93.7 The Fan, Steelers guard David DeCastro revealed that Burfict spit on him during the game.

We are not sure when this exactly took place, but after DeCastro pancaked Burfict in the first half, the linebacker wound up on top and that would’ve been as good of time as any for him to spit on the Steelers guard.

In case you missed it, we’ve already detailed several of the thug-like moments that Burfict had Saturday night and I’m sure a few more stories like DeCastro’s will surface in the coming days.

The Bengals linebacker is expected to be fined this week and a suspension is also likely forthcoming for him.

Update: Burfict is also alleged to have told DeCastro to “watch your knees” after DeCastro pancaked him in the above play. Per Gerry Dulac’s Tweet.

Another nice Burfict moment: After G David DeCastro pancaked him into end zone, Burfict got up and said, 'Watch your knees."

Today is DeCastro’s birthday. But I don’t think Burfict is going to be invited to the party.