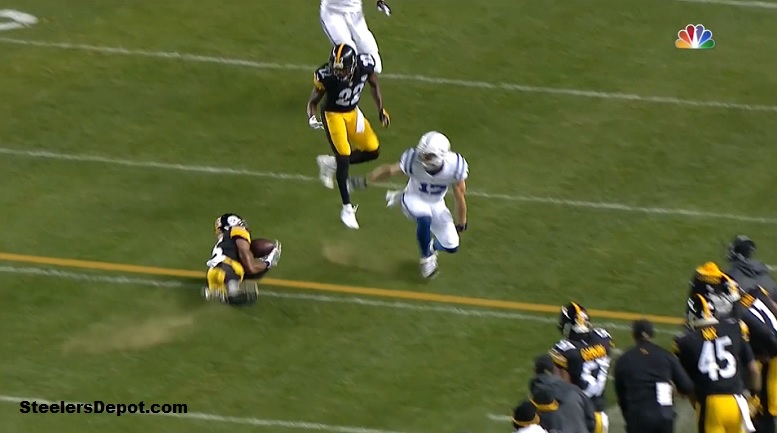 Throughout the week, the Pittsburgh Steelers coaching staff made it clear that while we might see a few changes in the defensive secondary Sunday night in the team’s game against the Indianapolis Colts, they probably wouldn’t be wholesale. In other words, William Gay, Antwon Blake, Ross Cockrell and Brandon Boykin were all likely to see playing time against the Colts. Well, that’s exactly what transpired.

While the seldom-used Boykin didn’t start the game Sunday night, he did play extensively in the team’s nickel sub package. Additionally, Blake and Cockrell also spilt time on the outside opposite Gay.

Boykin’s impact in the game was obvious as the former Philadelphia Eagles draft pick recorded an interception on a tipped pass with 4:11 remaining in the first quarter and he followed that up with two defensed passes later on in the game.

During his post-game press conference, head coach Mike Tomlin was asked if he was pleased with what he saw during the team’s big win as it relates to the changes the team made in their defensive secondary. Tomlin, as you probably would expect, downplayed the changes.

“I thought it was positive but it wasn’t because of the change,” said Tomlin. “You can make that the story, but we played collectively hard. Rush and coverage worked together, we minimized big plays and that’s the formula for playing well back there.”

Tomlin was later asked if Boykins interception early on in the game made him alter his plan with the cornerback rotation from that point forward.

Boykin, who the Steelers acquired via trade with the Eagles early on during training camp, talked about his interception after the game.

“That was it, the opportunity I was waiting for” Boykin told the media. “It’s a blessing to come in and make an impact right off the bat.”

Now that Boykin has finally seen considerable playing time in a game, Tomlin needs to continue putting him out there as much as possible. While the Steelers head coach is attempting to down play the results, there were positive results nonetheless and they can’t be ignored.

Do Tomlin and the rest of the coaching staff deserve criticism for not playing Boykin more before Sunday night? Absolutely they do and that will likely be one of the main narratives from now until next Sunday. The other main narrative, however, should be that the Steelers won Sunday night and hopefully that’s the first of five in a row to close out the 2015 season.