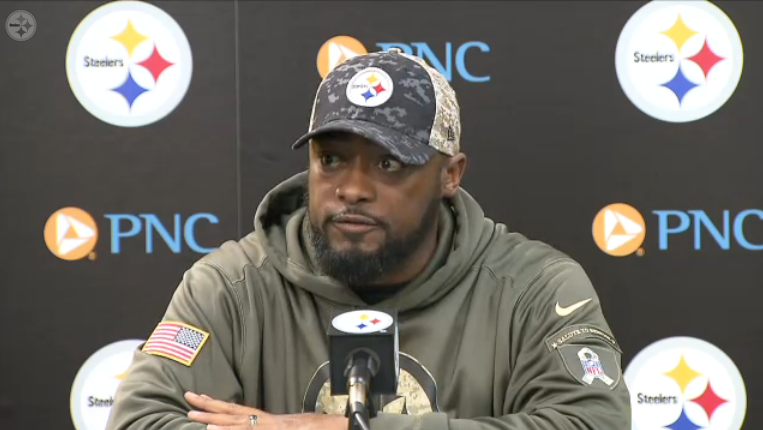 By most people’s expectations, Jesse James has done reasonably well in his rookie campaign. It’s fun just to get excited about a rookie. Bud Dupree aside, there really hasn’t been anyone to watch. Senquez Golson’s season ended before it ever really began, Sammie Coates and L.T. Walton are friends with sweatpants and seatwarmers, while Anthony Chickillo has only gotten a cup of coffee.

James is the outlaw, and it’s fun to watch that Yinzer yell Heeeeeeeath when you know it’s James who caught the ball.

But Mike Tomlin knows there is a long way to go.

“Let’s hold out on the starting tight end,” Tomlin said with a chuckle to the question of if he was becoming more comfortable with James as a starter, as he did replacing Heath Miller Sunday night.

“Jesse’s doing some nice things. More than anything, I like his overall gameday demeanor. He’s a good guy, a clean guy to communicate with. It’s obvious the stage is not to big for him. He made some nice lays for us early. It’s good to see early contributions for a guy in his position. He didn’t ave to warm up to play.”

James was involved early in Sunday night’s win over the Indianapolis Colts. In fact, all three of his receptions came on the Pittsburgh Steelers’ first four plays of their second drive, including a nice 20 yard snag over the middle.

Where he did struggle was as a blocker, having trouble locating and sticking especially on some of the Steelers’ counter runs. Tomlin acknowledged it was acceptable but like James as a whole, is a work in progress.

“In a conversation with [tight ends coach James Daniel], we were walking out late last night, there’s more meat on that bone.”

For the second week in a row, James convincingly outsnapped Matt Spaeth. While that wasn’t surprising two weeks ago in Seattle, a game where the Steelers were playing from behind, the fact he played more in a blowout is much more telling for where he stands. Spaeth is still listed as the #2 on the new depth chart but that appears to be the only place where he’s ahead of the rookie.