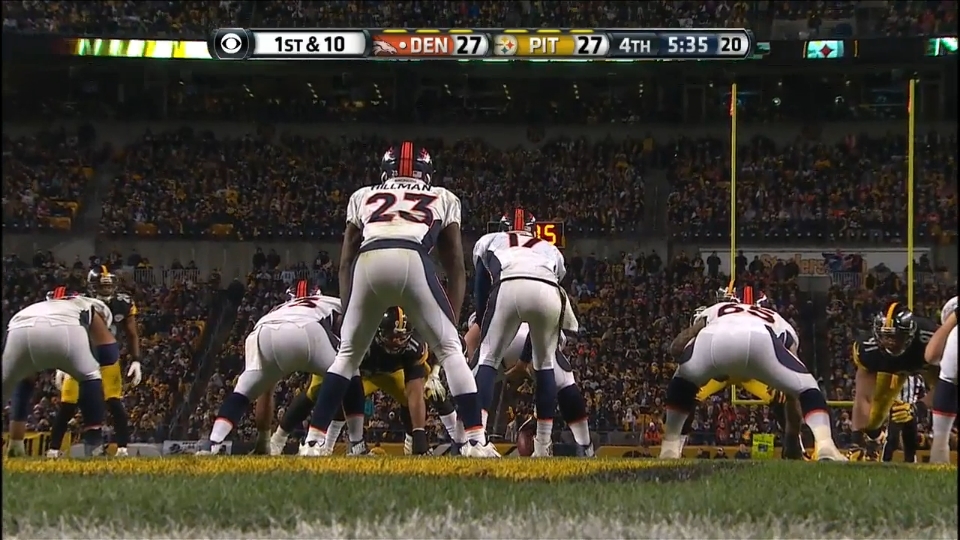 Another week, another Pittsburgh Steelers win in which they scored 30-plus points.

But this isn’t just any win for the Steelers. Sunday’s 34-27 win over the Denver Broncos was a statement win — a statement louder than the one made one week ago against the Cincinnati Bengals.

Sunday’s performance against the No. 1 ranked defense in the NFL was incredibly impress, mainly in the second half, as the Steelers offense became the first team all season to score 30-plus points and rack up 300-plus passing yards against Denver all season.

However, without some major adjustments on both sides of the ball at halftime, the Steelers likely never rally from the 27-13 halftime deficit. Kudos to the coaching staff for the adjustments and for the players starting to execute at a high level in the second half, mainly Ben Roethlisberger and his receivers, as well as the defensive secondary, which rebounded from a disastrous start against Brock Osweiler and Co. to help lead the Steelers to an impressive home win.

Outside of two poor interceptions, Roethlisberger was very good against the Broncos secondary that came into the game allowing just 188.9 yards-per-game.

Roethlisberger doubled that total, Sunday, completing 40-of-55 passes for 380 yards and three scores to lead Pittsburgh to the improbable come-from-behind victory.

Early on, Roethlisberger looked a bit shaky against Denver’s secondary, misfiring on a few occasions while throwing a bad pick to Josh Bush in the middle of the field, missing Markus Wheaton on a crossing route.

From there Ben bounced back in a big way by taking what the Broncos would give him underneath, dinking and dunking down the field as Denver rarely had an answer for the Steelers passing game in the second half.

DeAngelo Williams had a rough outing, Sunday, rushing for just 26 yards and a touchdown on 14 carries (1.9 yards-per-carry) against a Broncos defense that was No. 1 in rushing defense coming into the game.

Outside of his early rushing touchdown, Williams had a tough time of finding running lanes as he was constantly under siege once he took the handoff from Roethlisberger.

Fortunately for Pittsburgh, Williams was able to contribute in other ways, catching five passes for 30 yards out of the backfield on six targets.

It wasn’t his day, Sunday, but Williams will bounce back like he has all season.

No Fly Zone? Well, the Steelers wide receiving corps was cleared for takeoff all day long as Antonio Brown (16 catches, 189 yards, two scores), Martavis Bryant (10 catches, 87 yards) and Markus Wheaton (six catches, 62 yards, one touchdown) had outstanding days against the top secondary in all of football.

Brown — who drew the tough task of going up against arguably the best cornerback in football in Chris Harris Jr. — absolutely torched the Broncos’ cornerback, Sunday.

Right from the Steelers’ first possession, Brown had his way with Harris Jr., who really struggled with Brown in man-to-man coverage.

Week after week it’s starting to become very apparent that Brown can’t be covered by anyone in this league. Talking heads will debate about who is the best receiver in football, but week after week Brown continues to make a compelling case.

While Brown went off against Harris Jr., Bryant had a big day against Aqib Talib, hauling in a career-high ten receptions, mainly on quick throws to the outside, allowing Bryant to try and make plays after the catch.

Wheaton also had a strong day out of the slot as he continues to emerge as arguably the second-best receiver on the Steelers behind Brown. What a turnaround we’ve seen from Wheaton dating back to the Seattle game.

When the receiving corps plays like this, there might not be any team in the league that can beat the Steelers but themselves.

Due to Denver’s tenacious pass rush, Heath Miller was asked to stay in and block more often than not, effectively removing one of the more productive middle-of-the-field receiving threats in the Steelers offense.

Miller did haul in three passes for 12 yards on just five targets, but much of his impact was made as an extra blocker.

The Steelers struggled to run the ball against Denver and had a rough time of trying to protect Roethlisberger for much of the game, which forced Miller to stick near the line of scrimmage.

Pittsburgh’s offensive line struggled to get anything going on the ground against Denver and allowed plenty of pressure on Roethlisberger.

In the win, the Steelers’ offensive line allowed three sacks while allowing another four quarterback hits on Roethlisberger.

At times it looked like the offensive line was completely overmatched against Denver as Malik Jackson, Sylvester Williams, Derek Wolfe, Von Miller, Shaquil Barrett and DeMarcus Ware found themselves in the Steelers’ backfield more often than not, Sunday.

We knew coming into the game that the Steelers offensive line was facing their toughest test yet. Although Pittsburgh picked up the win, the offensive line didn’t really “pass” the test, if we’re being honest.

They have to be much, much better moving forward if the Steelers want to make a run to the Super Bowl this season.

Up front, Cam Heyward (two tackles, one sack), Stephon Tuitt (five tackles) and Steve McLendon (one tackle, one tackle for loss) had strong games up front.

With his sack of Osweiler, Heyward now sits just half a sack behind his career-high of 7.5 sacks in a season.

While the front seven didn’t generate much of a pass rush, Sunday, the defensive line came up big against the Broncos’ running game, holding Ronnie Hillman to just 48 yards on 14 carries.

Another week, another lackluster pass rush by the Steelers.

James Harrison didn’t even show up on the stat sheet, while Bud Dupree and Jarvis Jones rarely put any form of pressure on Osweiler throughout the game.

Dupree did record one quarterback hit in the win, but going up against Michael Schofield — who was so bad one week ago against Khalil Mack — the rookie linebacker didn’t do much at all.

Fortunately, the linebackers were strong against the run, namely Lawrence Timmons, who finished with six tackles and a sack in the win.

While Timmons turned in yet another strong performance from the inside linebacker spot, Ryan Shazier matched Timmons play for play.

Shazier finished with six tackles and a career-high three passes defended, including his first career interception that led to the go-ahead touchdown from Roethlisberger to Brown.

Since missing a handful of games midway through the year, Shazier has come on in a big way for the Steelers defense.

I’ll have a breakdown of Shazier and Timmons’ play later this week.

In the first half the Steelers’ secondary deserved an F outright.

The play of the secondary in the first half was downright horrendous as Osweiler picked apart Pittsburgh’s 31st-ranked secondary, leading the Broncos to a 20-7 lead before the Steelers even knew what hit them.

While the first half was a pathetic display by the secondary, things changed in a major way coming out of halftime.

After Denver went 8-for-8 in the first half on third down, the Broncos went just 1-for-9 in the second half as Mike Mitchell, Will Allen, Robert Golden and the rest of the secondary stepped up in a big way to shut down Emmanuel Sanders, forcing Demaryius Thomas and Vernon Davis to beat the Steelers.

Lets see if Keith Butler and the rest of the defensive coaching staff sticks with the changes moving forward that they made prior to the second half.

Chris Boswell finished 2-for-2 on field goals with both field goals coming in the first half.

The “Boz” did look a bit shaky on his 24-yard field goal as he knuckled it into the left goal post before the ball deflected in.

Outside of Boswell, punter Jordan Berry had a strong day dropping four of his six punts inside the 20-yard line. Although the net yards don’t look pretty (38.7 yards-per-punt), he punted mostly with a short field ahead.

Kudos to him for placing the majority of his punts inside the 20.