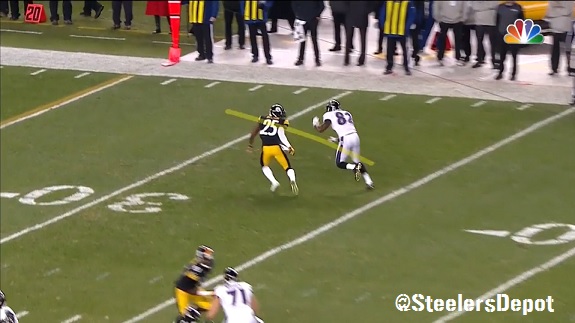 The NFL’s compensatory formula is just one of many confusing processes in the league. But according to Over The Cap’s trusted experts, they anticipate the Pittsburgh Steelers netting a late 7th round pick for Brice McCain in the 2016 NFL Draft.

The Steelers are projected to receive the next-to-last compensation pick, mainly centered around McCain’s $2.75 million average yearly value. McCain signed a two year, $5.5 million contract with the Miami Dolphins in the offseason. McCain has been somewhat limited by a knee injury, playing just 62.1% of the snaps in 2015. He has 25 tackles and one interception – albeit a highlight-worthy one – on the year.

Over The Cap will release a final projection at the end of the season so there’s still a chance McCain will be off their list, especially with how close to the edge he is.

In no surprise, the Detroit Lions are projected to receive the highest comp pick for Ndamukong Suh. The Baltimore Ravens are projected to nab a pair of fourth round picks for the losses of Pernell McPhee and Torrey Smith while grabbing a sixth for Owen Daniels. The Cleveland Browns are expected to get two fifths for Jabaal Sheard and Brian Hoyer. The Cincinnati Bengals are not expected to receive anything.

The league has announced the ability to trade compensatory picks but that won’t begin until 2017.

Starting with 2017 NFL draft, compensatory picks will be tradable for the first time.