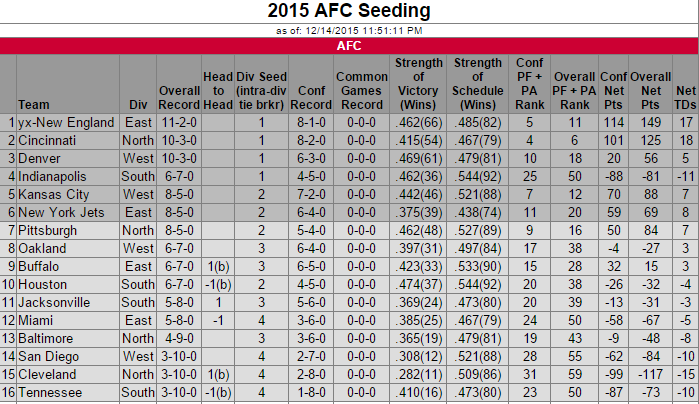 For official purposes, the Pittsburgh Steelers are currently the No. 7 seed in the AFC with three weeks left in the 2015 NFL season. However, don’t get caught up with that seeding number as the Steelers actually control their own destiny, unlike the New York Jets, who are currently listed as the No. 6 seed.

The Jets are only ahead of the Steelers right now in the seeding because they have one more conference win. They’ve also played one more conference game than Pittsburgh has but that will change this coming weekend as the Steelers will host the Denver Broncos while the Jets will play the Dallas Cowboys on the road. Should the Steelers and Jets both win in Week 15, Pittsburgh would then leapfrog New York in the seeding due to them having the better record against common opponents.

Should, however, the Steelers lose to the Broncos on Sunday and the Jets beat the Cowboys Saturday night, Pittsburgh’s chances of making the playoffs still aren’t awful as long as they win out and New York loses to the New England Patriots in Week 16. Even if the Jets beat the Patriots, but lose to the Buffalo Bills in Week 17, the Steelers can still make the playoffs as long as they win their final two games, as they should own the strength of victory tiebreaker over New York.