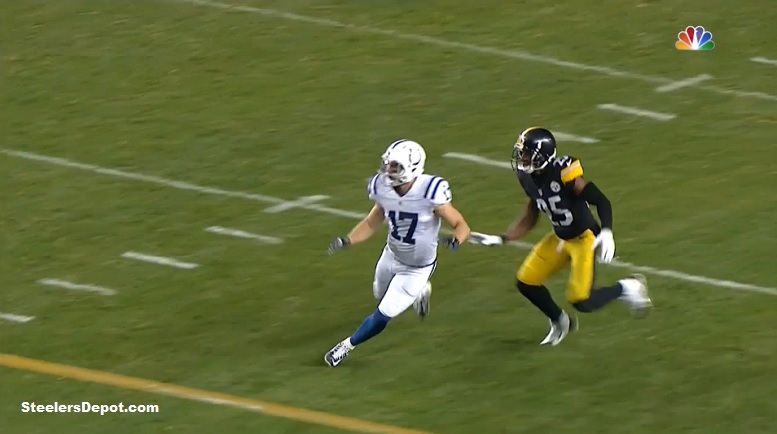 This past Sunday against the Indianapolis Colts we finally got a chance to see cornerback Brandon Boykin play extensively in the Pittsburgh Steelers defense. Boykin responded by registering his first interception of the season in addition to a pass breakup later in the game. During his Thursday interview on Steelers Nation Radio, defensive coordinator Keith Butler talked about how Boykin played Sunday night in addition to how he’ll be used moving forward.

“Well, sometimes he’ll be in that position to make plays in the passing game, but not so much in the running game because of the nature of his position, number one,” said Butler. “And two, the nature of the situation that he’s going to be in there on. So he’s mostly in there on passing downs for a lot of those times and he did a good job for us while he was in there.”

If you read the breakdown of the cornerback rotation that I posted a few days ago, Butler’s comments about how Boykin will be used probably aren’t a big surprise. For the most part, you can probably expect to see him as the slot corner in the Steelers nickel package in obvious passing situations. However, if team’s try to run at Boykin when he’s on the field, he thinks he’ll be ready for the challenge wghen it comes to his tackling ability.

“It’s never been a problem,” Boykin said, according to the Pittsburgh Tribune-Review. “I missed a tackle last game, but I missed like four or five tackles in my career. Anytime you have a defensive back in the run position, they are going to use that to see if you can tackle. Once they see that you can tackle, they don’t mess with it.”

As far as the rotation outside goes, expect Antwon Blake and Ross Cockrell to continue to rotate on the left side with the latter getting the bulk of his snaps in the nickel

“I liked it, I think it helps us,” Butler said Thursday about the rotation he used Sunday night. “Our guys were getting worn out this time of year. We played a lot of football games, including five preseason games. Those guys have never played that many snaps in a season. It was starting to wear on them, I think, both mentally and physically. It was good for us that we ran some people in and out and they were productive. And hopefully, we can keep that up.”

The Steelers will see if they can indeed keep it up Sunday against the Cincinnati Bengals.